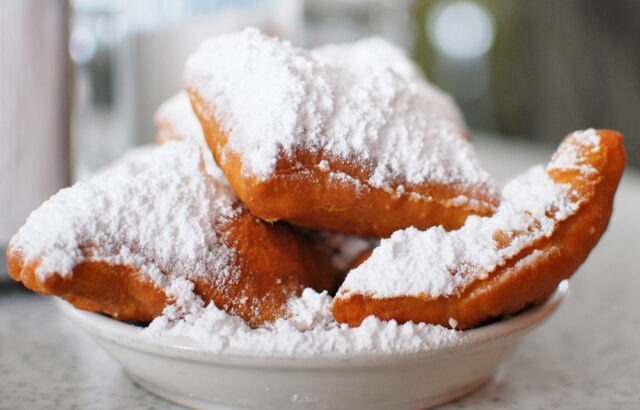 Close-up of an order of Beignets from Cafe Du Monde (photo courtesy of HoneysuckleLife.com).

As I write this, Mardi Gras is in full swing, and you’re reading it during the biggest weekend of Mardi Gras and days before Fat Tuesday. Thus, I must dedicate my writings to the Beignet. My little ode to my home away from home… New Orleans. Yes, beignets are eaten around the world, but nowhere in the globe are they more reveled than in The Big Easy. 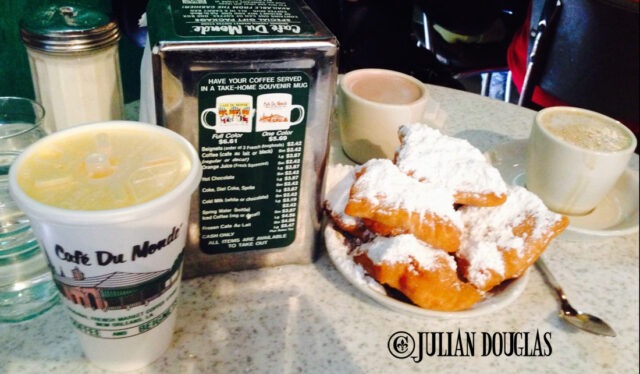 First off, many of you are asking… what is a Beignet? Well, I’ll answer that with what they are exactly and a bit of history and then I’ll get into a bit more after, as in where to find the best, types of beignets and more. 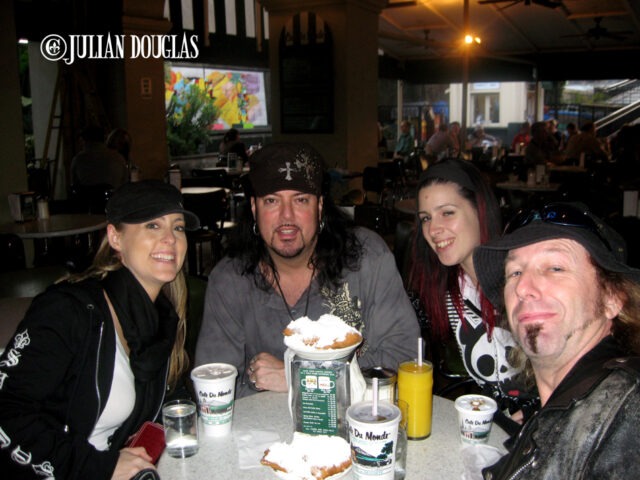 One of our many visits to Cafe Du Monde in New Orleans, this time Nicole & I with Colby and Bo.

Some may simply call the Beignet, a type of donut. Shame on them, though it’s partially true. It IS actually a French pastry, more so a pastry made from deep frying “choux pastry”. Choux is “light” pastry dough, containing only flour, butter, eggs and water. It doesn’t contain a raising agent like other doughs. Other uses of a choux pastry dough are eclairs, croqeumbouches, profiteroles, curlers and more. So you get the idea, the French use that type of dough often, and they make things from it that taste great. The beignet though, is usually always, square cut, covered with powdered sugar and served hot, making it recognizable right away. 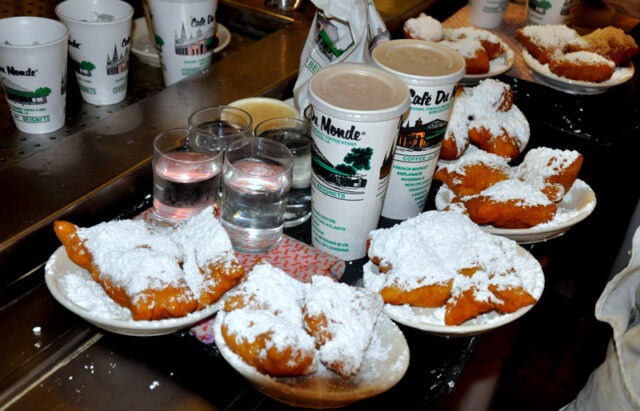 Just another tray coming out of the Cafe Du Monde kitchen heading to hungry guests (photo courtesy of NewOrleans.com).

Though originally from France, it is now more commonly known as a New Orleans staple. That’s because back in the 1700’s, French colonist brought the beignet over with them, becoming a standard of the New Orleans Creole style of cooking. Back then they were usually stuffed with plantains and other fruits and a breakfast must have, but before long when the legendary Cafe du Monde opened in 1864 with simple versions doused in powder sugar, people started enjoying beignets at all hours. Served along with either their coffee with chicory, a cafe au lait or these days an orange juice, Cafe du Monde, is the place most known through out the world as thee beignet destination. 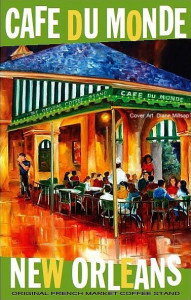 New Orleans IS the place for beignets, and just about every coffee shop, diner, restaurant and even food truck, serve them up there. These days the famous Cafe du Monde pre-mix is sold online and found in shops worldwide. However, I’ve had beignets all over The Crescent City, I’ve had them globally, and even make them at home, but nowhere do they match the simplicity of the ones made at Cafe du Monde, or have that distinctive and delicious flavor of their’s. 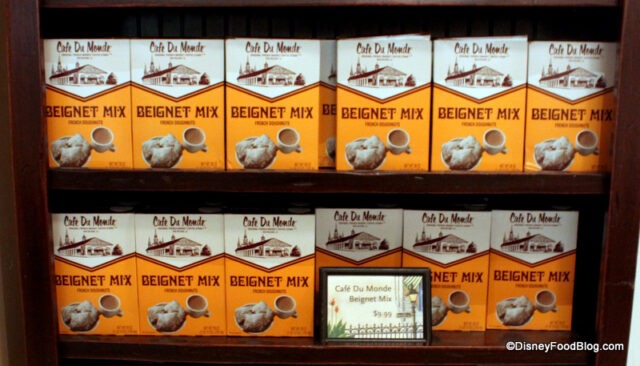 What makes their’s so special? One thing that separates them from other places in New Orleans, let alone pretty much anywhere else outside of Louisiana, is they use cottonseed oil. Cottonseed oil is hard to find away from the South and let’s face it, you’re talking about the substance it’s cooking in. It also may be the way they cover them in powdered sugar, and I mean cover. You can look around at all the packed tables and all that sugar seems like a scene out of Scarface, lol. Some say it’s also a combination of the water, and even the flour they use. Let’s face it, combine all those factors, and then realize THEY have been making them the same way for over 150 years. I would say they know what they’re doing.

As simple and successful as Cafe du Monde has been with their beignets, the rest of the world has finally caught on to this little piece of fried dough and began to elevate it. In fine restaurants everywhere, a trend has developed of finding new and exciting things to either stuff inside of a beignet, or drizzle over them, let alone the endless amount of dipping sauces. The early tradition of stuffing one with plantains or bananas, to various berries, has kept going but with more exotic fruits. I’ve tasted beignets filled with dragon-fruit, mango and passion fruit., to ones filled with amazing cheeses. I myself make one around the holidays using a little egg-nog in the dough. I’ve seen apples & cinnamon to spinach & artichoke. And if you have a favorite chocolate, you can bet it’s found its way either into or dripped on top of a beignet. 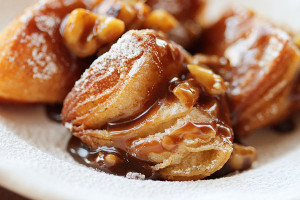 For me, I’m a traditionalist. Maybe it’s because the first one I ever had was at Cafe du Monde, and that memory of the way it looked, and the way it tasted, set my bar. Luckily for those of us living in the Los Angeles area, we have some choices. From the best Cajun & Creole spot in L.A., Ragin Cajun Cafe in Redondo Beach, to the New Orleans most famous restaurant family, the Brennan’s and their location in Downtown Disney, Ralph Brennan’s Jazz Kitchen, I have two great places to enjoy a genuine beignet, along with a true Nawlins meal. Speaking of Disney, next time you’re at Disneyland, hop over to New Orleans Square and you can even have Mickey Mouse shaped beignets. There’s a handful of other Cajun/Creoles eateries in the City Of Angels which I need to try, but living up to Cafe du Monde won’t be easy. That’s alright, no matter what, if they’re serving up a beignet, I’ll be a happy man. So next time you see that curious word Beignet on a menu, I strongly suggest you make sure to order up a plate or two and enjoy. 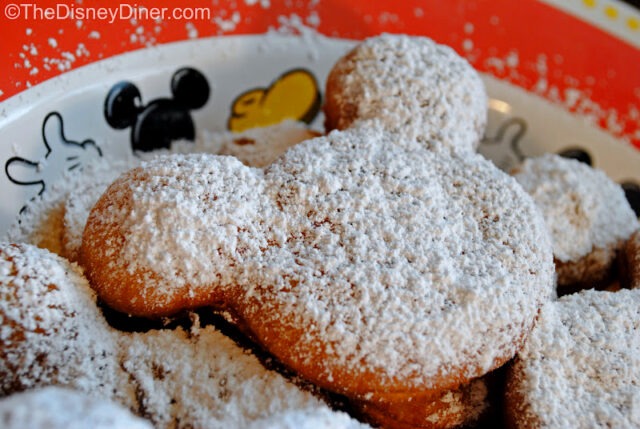