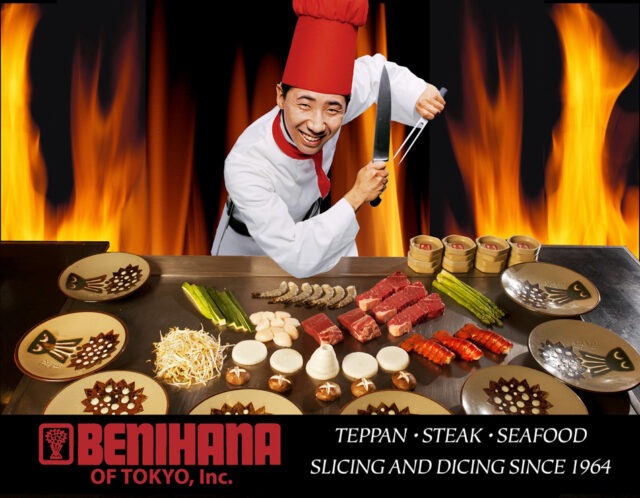 Benihana has been around for quite some time, originally opening in New York City back in 1964 by a young man, Hiroaki Aoki, better known to all his friends as “Rocky”. Rocky had an unusual concept for that time, taking the “Teppan” style of cooking (grilling on a steel griddle), with a chef telling jokes, twirling knives, all the time preparing the food in front of the restaurants guests. During it’s first year it wasn’t much of a success, but after a New York columnist gave it a rave review, the tide had turned. In no time it was being frequented by the likes of everyone from The Beatles to Muhammad Ali and he was moving into a larger location, which became the theme of all his future locations, decorated with authentic Japanese décor, including the Samurai outfits and all. Within only 4 years he was opening his second location, in Chicago, and as they say, the rest is history now, with currently 116 restaurants to date, located in 22 countries. Our favorite ones are Beverly Hills, Torrance and Santa Monica, all here in the Los Angeles area of California. Guess it’s safe to say, the concept caught on. 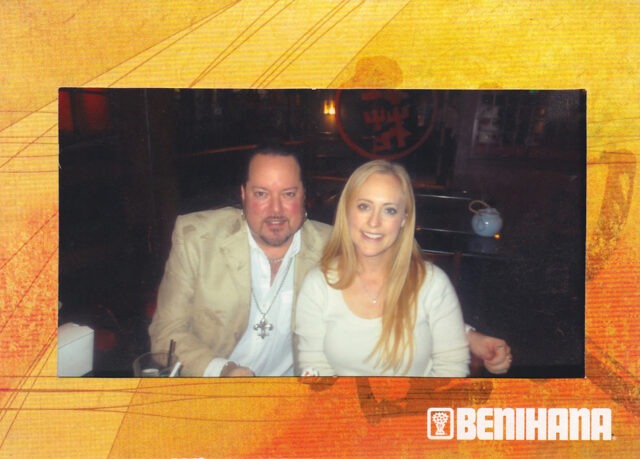 I’ve always stated and lived by the notion that dining is not just eating food, but an experience. Yes it’s of course about the food, but it should be something more, each and every time. Especially with friends and loved ones, it gives you the chance to make memories. Benihana makes it hard not to have memories take place. It’s all about the experience there, a form of entertainment. It’s what Rocky started when he opened the first one and continues to this day. 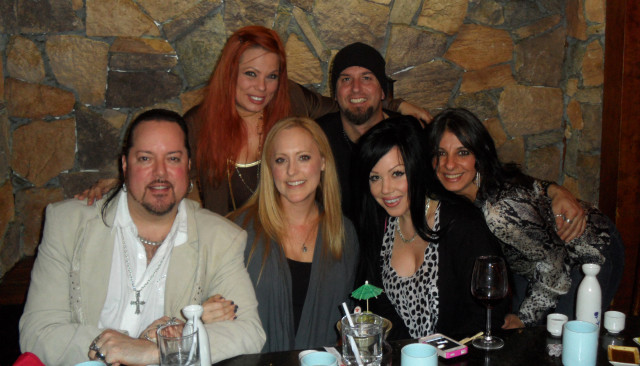 Nicole, wonderful friends Nathan & Nicole, Michelle and Rah, out for my Birthday at the Beverly Hills restaurant, September 2011.

The “show” put on by the chefs are legendary. They’re masters with their knives when it comes to cooking as much as they are performing with them. Swirling around the air then down to make precision cuts to the food, they never miss a beat. There’s their one-liners making you laugh, along with the tricks to do with the food. One of my favorites which can’t be done anymore, was one of their most known. Cutting up the shrimp being grilled then flicking them into the customer’s mouth. I guess some moron at one point either sued them saying they burnt him, or they wanted to stop before that happened. Now they just pop the shrimp into either their own shirt pocket, or on top of their chefs hat. 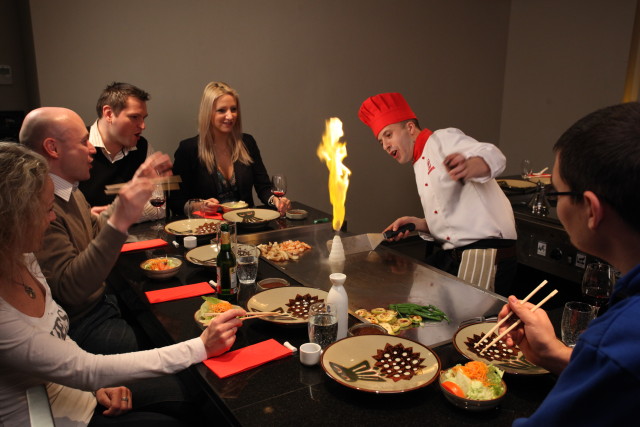 Then there’s the old volcano they make from sliced up onion rings, including the flaming eruption with smoke, with the help of some oil and flickering lights. Add a little “choo choo” and next thing you know it’s a train going across the griddle and don’t forget the fun they have with the fried rice. Depending on the occasion, you may end up with a beating heart, an I <3 U, Mickey ears or my favorite… Pac Man. 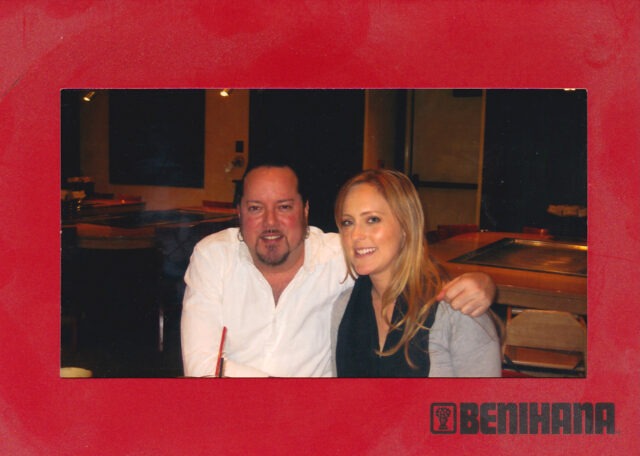 It‘s all part of their dedication to an “experience“, but it’s not only about the “show” cooking the meal, it’s also about the ingredients they use preparing it. Not many realize for example, the steaks are always USDA Choice or Prime. I say that only because I’ve been told one or the other at different locations. As far as all the meats, including the seafood, to the vegetables, every item tastes as fresh as they look. I’ve been to many locations for many years, and never, have I ever heard someone there dining, say the food didn’t taste great. Actually I’ve never heard one complaint, well a few, but those usually have to do with their Birthday coupons from patrons who might not of ever been, nor ever planned on coming again, which I will get to in a bit, lol.

Back to the food, because no matter what, entertainment aside, Benihana would not have had the success they have had for so many decades if the food wasn’t as great as it is. For me, I’m easy, and that I found the one meal on the menu I fell in love with and for at least a decade, have always ordered the same thing, each and every time. There are many choices, and many items I love that they prepare, but their top item, the most expensive of course, also is the perfect combination of what I love. It’s called the “Hibachi Supreme”, featuring an 8.5 ounce Chateubriand (center cut, beef tender loin), served with a cold-water lobster tail, doused in their specialty butter and lemon. The chef grills it to perfection. Costly? Well at around $48.00, to me, that’s nothing for this kind of a meal, especially since it comes with more than that. Two of my weak spots when it comes to Benihana are their onion soup and salad with their signature ginger dressing. How much do I love the salad dressing? Well just about every visit I actually let the server know to add a pint of the dressing to go. Which isn’t the only thing I’m always taking home. Another weak spot I have are the souvenir tiki mugs. Yes, I confess. My wife isn’t a big fan but I’m addicted to collecting them all, and to date I believe there’s only one that still eludes me. You see, for a certain up-charge, you can keep the mug certain cocktails come in. Their white, ceramic mugs in various Asian designs, from dragons and ninjas to geisha girls and Buddha’s. Which makes for just another excuse each visit to try a different specialty drink. Trust me, they not only have the usual fully stocked bar, but an array of exotic creations, including monthly specialty cocktails. 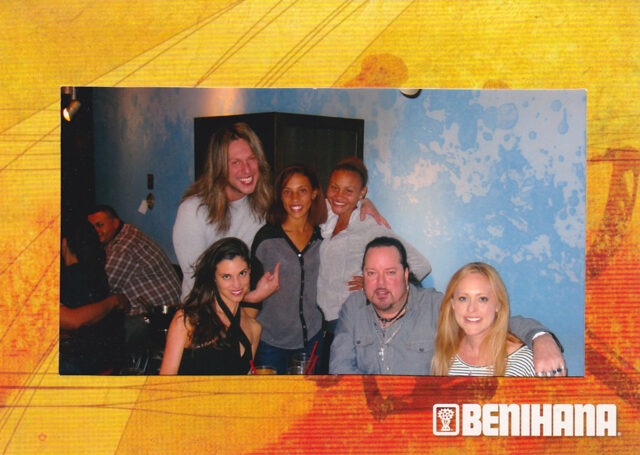 Another fun & crazy Birthday celebration for me with Nicole, best friend Jeff George and anyone else who wanted to party, September 2011 (photo courtesy of Benihana).

Another great topic with their food, is the preparation. One of the great things with having your chef right there in front of you, though entertaining the table, is being able to communicate any specifics you want. More than just do you want your steak medium rare, but way more than that. For example, my wife has several food allergies, being gluten and dairy free, and if that’s not enough, she’s a vegetarian. For starters she brings her own tamari sauce, which is a gluten-free soy sauce. Unlike some places, here the chef’s have no problem using it as they prepare her food. They are also truly respectful of her allergies, and we’ve always had a chef that goes out of his way to prepare her food on a portion of the grill that doesn’t touch others food. They even make sure they use either different utensils or constantly wipe the ones down prior to touching her food. We’ve gone to many places we let the server know about her food allergies, but sometimes you’re never sure what they do in the kitchen, but here, the chefs are right there in front of you, and Benihana really cares. That alone has made us regulars, but the food choices for her don’t hurt. Some places we just expect she’ll end up having a salad and maybe some rice, but not here. Between the sushi choices, and the vegetarian dishes, she always comes home with a happy tummy. Which of course has never been a worry of mine, lol.

Not that we would ever need an excuse to go, but one of the great things Benihana also does, is their Birthday Club. Actually what they’ve done the past few years is if you sign up for their Chef’s Table newsletter, which basically is their monthly e-mail containing all their specials and news, they send you a $30 gift certificate, good for one visit during the entire month of your Birthday. Plus they always throw in a complimentary photo they take of you, and even place it in a little cardboard frame. As you can see by some of the ones I posted here. Those that didn’t know about the Birthday Club, I’ve really let the cat out of the bag. It’s amazing how many that go there, haven’t been aware of it. The only downside, except for some newer restrictions, is that it makes it hard to get dinner reservations towards the last few days of each month, basically since everyone is trying to use their certificate before it expires. I mentioned the restrictions, so if you sign up, please make sure you know all their latest details. Even a regular like myself fell victim, just assuming it worked the same way as always, but they had changed without me reading the fine print of which nights you could use it on, and we went the wrong night. When I mentioned earlier in this blog about the few complaints I have heard, it’s always about the certificates, with people either not reading the fine print or even more hilarious, when they print out a duplicate certificate and pretend they haven’t used it yet. I could really make some comments about these people, but I’ll just leave it at that. 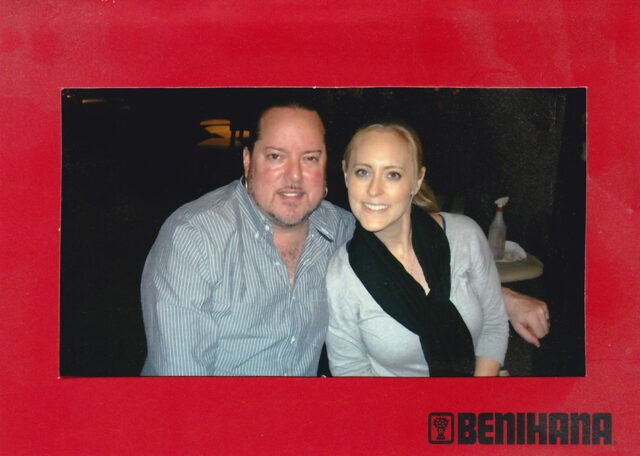 Another Birthday for me with Nicole at the Santa Monica restaurant, September 2012 (photo courtesy of Benihana).

I have tried Teppan restaurants all over the world, and there’s some out there I’ve truly loved, some, well really missed the mark. Benihana, especially for being a “chain” restaurant, has surprisingly always been consistent. Great food, attentive service, quality food and always an entertaining experience. They will always have choices for everyone. From their appetizers, sushi, entrees and even desserts, and oh yeah, those incredible cocktails, you won’t walk away hungry after, in fact, you’ll probably be planning your next visit as we usually do. If you haven’t ever been, it’s about time you finally go. Whether a romantic night for two, or celebrating something with a group of friends, it’s time to place Benihana on your to-do list. 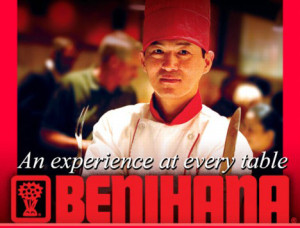