Our Journey to The City Of The Dead continues… Pompeii, the ruins of the city forever changed the day Mount Vesuvius erupted that morning on August 24th, 79 AD. 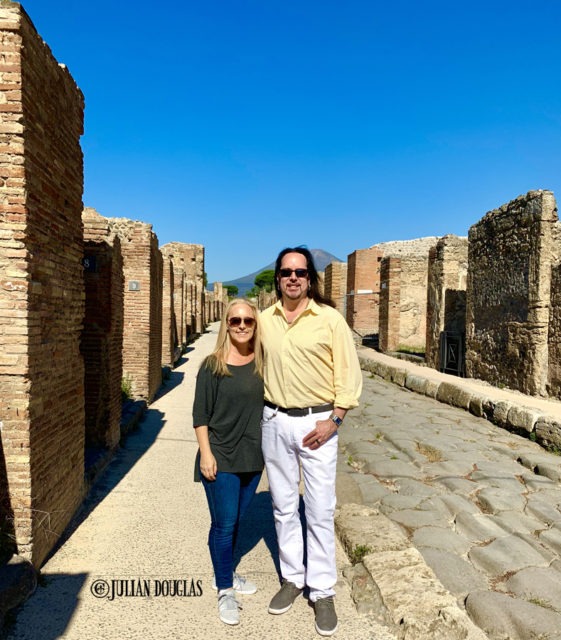 With Mount Vesuvius behind us and the desolate ruins of Pompeii around, only halfway through our time there and we were captivated forever.

There were so many places along our walk through the city blocks that had us realizing what it must have been like. If you’re the few that don’t know just why Pompeii has 2.5 million people visit each year, it’s due to how an entire city was frozen in time. So many locations are still being excavated with murals intact, wood, plate ware, valuables and of course, human and animal remains. 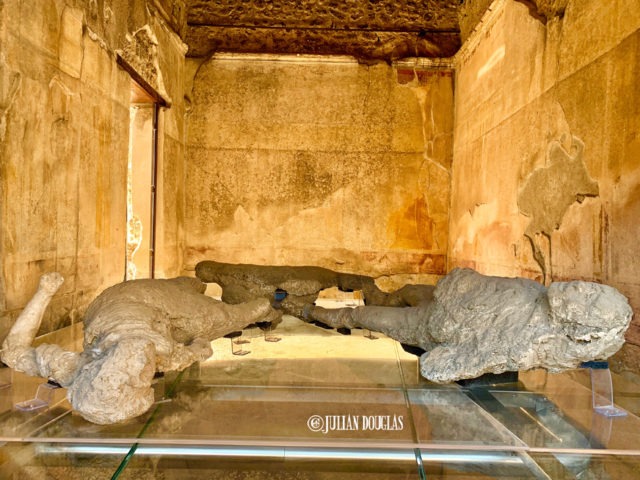 This family either never escaped from their home, or chose to stay. Either way, they remain for eternity. 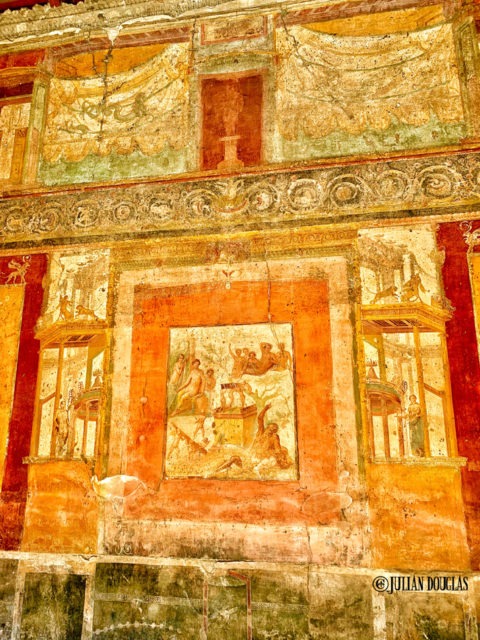 It’s amazing to see such vibrant colors, such as on the wall of this home, 2000 years later.

The businesses, knowing people were just going about that morning like any other day. Eateries, equivalent to our fast food places of today serving meals. We were able to explore these actual shops, walking the steps those people did one last time. 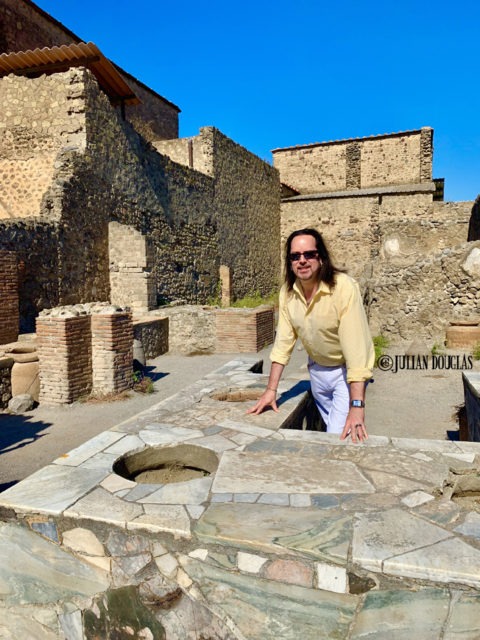 “Cosa posso ottenere?” or “What may I get you?”… was probably rung out at this local version of a fast food place, moments before the eruption.

Steps? Have you ever seen those monster stones in the middle of the streets of Pompeii in pics? Of course, I knew, as many might, what they were for, but again, seeing in person, and to actually walk on, was just too cool! Knowing how ancient a city it was, yet, they were advanced in sanitation, they constantly ran water through the streets to flush out the day’s sewage, horse droppings and more. Thus, these large, carved stones were used as “stepping stones” so citizens wouldn’t get wet or worse while crossing major thoroughfares. Ingenious! Not only did these large stone steps allow citizens of Pompeii to cross when water was flowing through, but, as you can see, the wheels from wagons and even chariots could pass as well.

Here’s another tidbit! One of the hidden gems, not all might be informed about, but being our personality I’m sure Imma couldn’t resist, was pointing out the occasional “penis” set in the road. Where it pointed? That would be the neighborhood brothel but of course. Guess if you were even blind or blindly drunk, crawling on your hands and knees, you could feel the outline in the street back then and know right where you were… or needed to be. 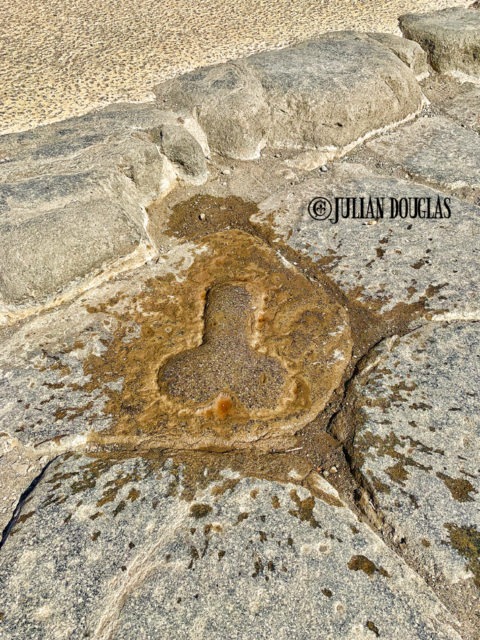 We had been walking over these little, actually big, street markings all day without noticing. Once Imma poured a little water on it, low and behold.

We could have walked all day. The views of Vesuvius from so many angles alone was mesmerizing. Still, there were endless places to see. From the Amphitheater, Palestra Grande, various popular gardens and houses including the House of Vettii, House of the Tragic Poet, House of the Faun and House of the Gilded Cupids, to, of course, the Forum. 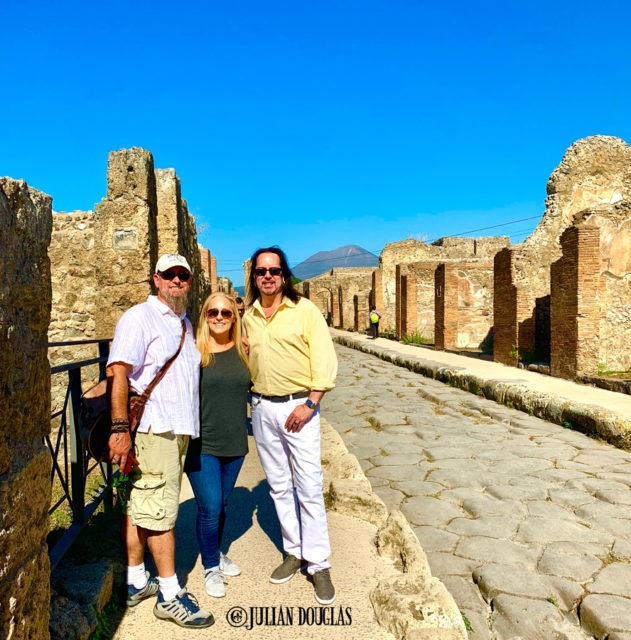 With Mount Vesuvius over my shoulder… yeah, this was a truly awesome moment for us.

The Forum, the center of activity and let’s face it, thee place to see when you come to Pompeii. This actual part of the city was discovered in 1820 during excavations and has been the shining jewel since. Unfortunately, being the place to see, regardless of VIP treatment, private tours or not, the minute you get here, it’s bedlam! 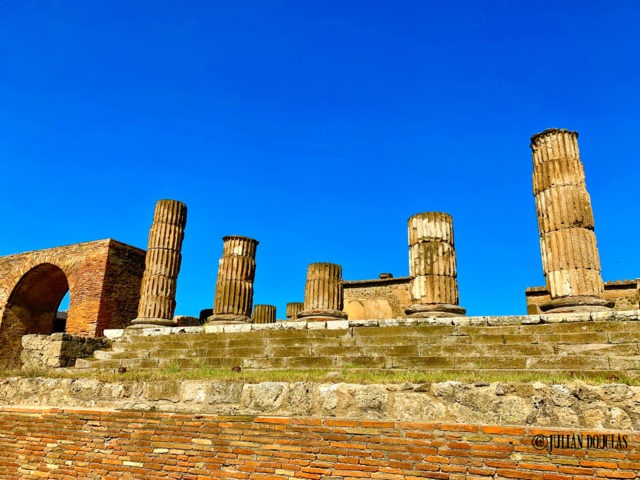 The Temple of Jove bordering part of The Forum.

Luckily, again, Imma timed it out so when we were there, though the most crowded spot of all, and though tourists all around, it truly wasn’t that bad. Let’s face it. This entire day thus far we were pretty spoiled. Most every picture, not a person around us, as were the spots we went, when we were there. So, given that, it was fine we shared this time now with a few hundred people around. 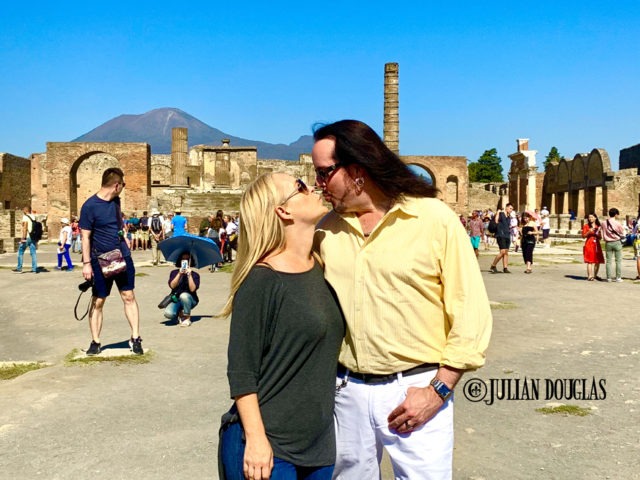 Come on people, of all times we want that perfect picture alone, standing in the middle of The Forum.

Knowing the Forum’s history here as in any ancient city, being there is simply something else. Next to The Forum in Rome, this forum was by far the next greatest place for us to witness. And yet, so well preserved considering it had been covered in volcanic ash and pumice for almost two thousand years. 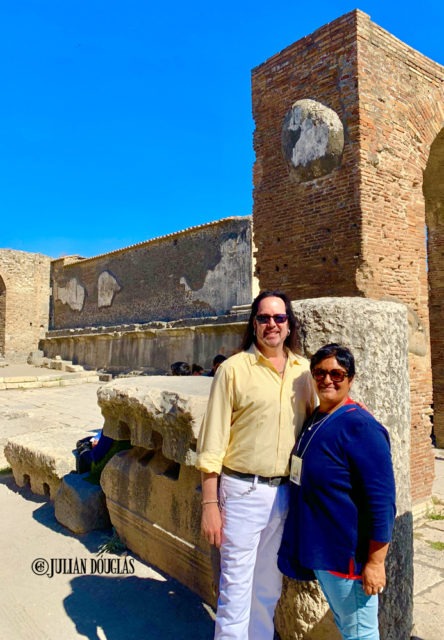 The lady of the hour(s) herself… Imma. Grazie!

This Forum truly was the city’s center. The huge square, though more of a giant rectangle, must have been some spectacle back in its day, surrounded by shrines, temples, and buildings, always buzzing with people. 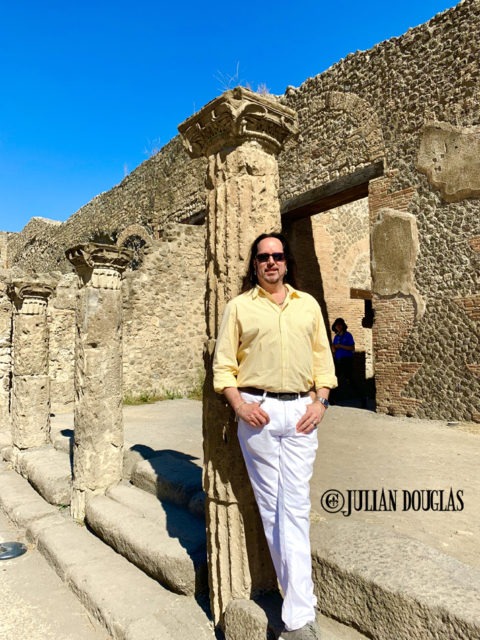 It’s kind of something else looking around and realizing you are here… Pompeii.

From the northern end with the Temple of Jupiter down to the southern end and the Basilica, the city’s tribunal area or legal center. All around… the Temple of Jove; the Shrine of the Lares; Temple of Vespasian; Macellum where food was sold; the Curia where the town council met; a hall that sold wool, the Temple of Venus and the iconic Temple of Apollo. 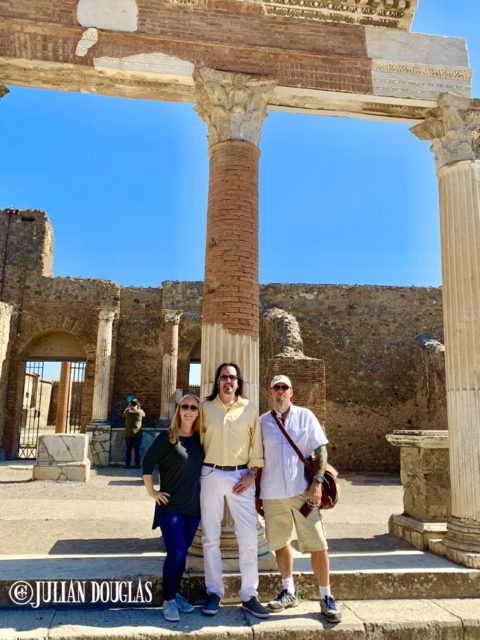 Still doing our best to avoid most the crowds, even by the Basilica.

Yes, it must have been something to see this area filled with the daily hustle and bustle of its residents living life. Housed here in the current Forum, they keep some of the preserved remains of its lifeless residents that were found. Those famed plaster castings of the bodies found during excavations. 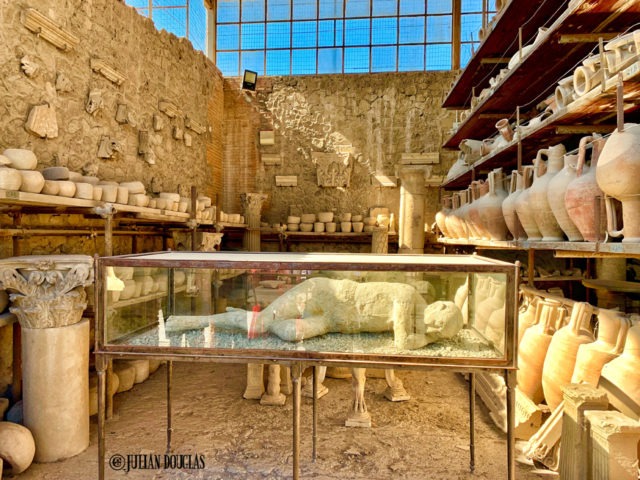 A man most likely laying down, succumbing to the lack of oxygen, never to awake again.

Again, you may have seen in print, online or on video, but being right up close to the bodies, in the positions of their last breathes is simply chilling. Some cast still with their bones, even skulls visible, just adding to the reality of those last moments. People laid down, curled up, sitting and praying, families and loved ones embraced, even household pets. It’s quite somber actually. 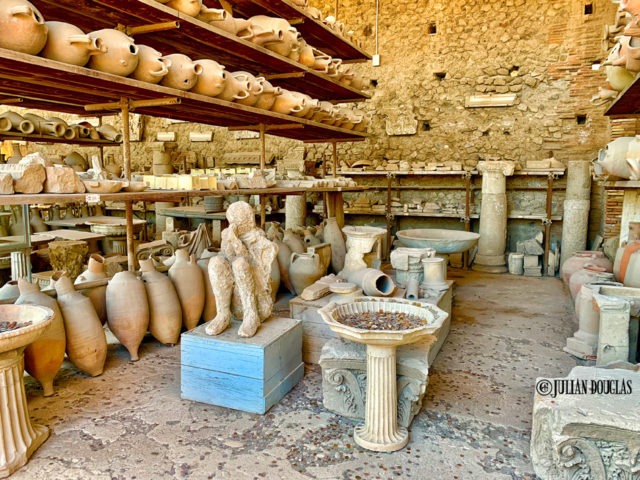 What were this man’s last actions alive? Was he saying a prayer, was he breaking down in tears, possibly even both?

One of the most incredible facts about Pompeii that some seem to forget, is that its continually being carefully excavated and that all work and upkeep relies on entrance fees and donations. On display, you’ll see everything from pottery, to fountains, vases and more that are brought and stored for the public to see. 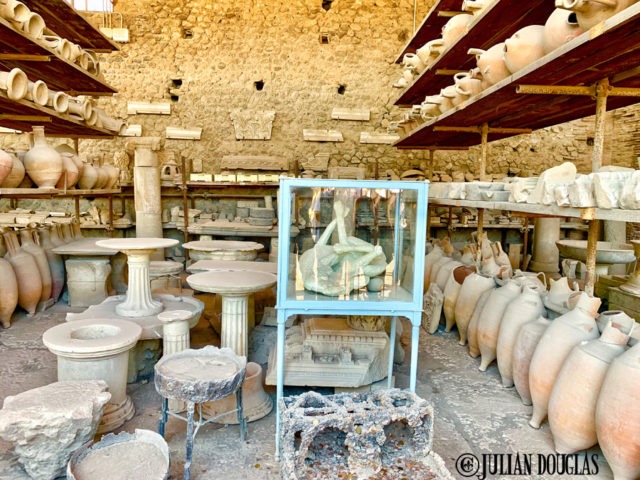 Surrounded by fountains and vases that have been uncovered, encased in glass… not even the family dog could escape the eruption.

The only frustrating moment was realizing it was time to start wrapping up our exploring and head back. There was still so much more to discover! Leave it to Imma to still not be done with us. We not only made a genuine connection, but we also made a wonderful friend who really brought us into the LivItaly family. 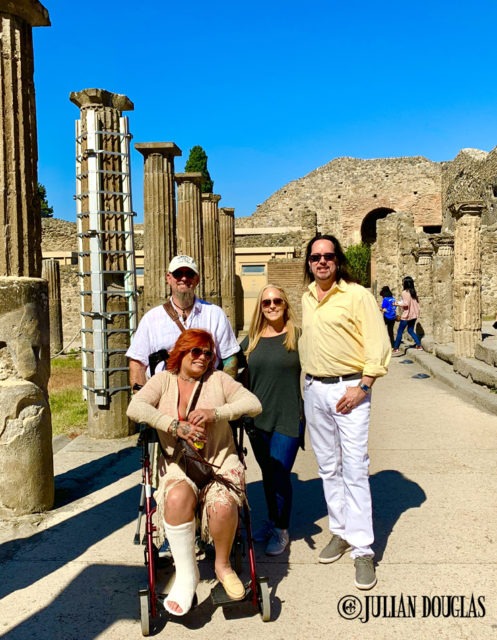 Imma even takes a good picture as we wrap up our day… Nathan & Nicole and Nicole & I.

Since the tour was over and we headed to the gates, you would assume we would be saying our goodbyes. But our new friend wasn’t ready. As we exited the ruins Imma kept the conversation going. Down the road we kept walking, by all the vendors selling their souvenirs… she even helped save us from getting scammed and haggled for us for a few good prices, then joined us for Limone e Arancia Granitas, refreshing iced lemon, and orange drinks. 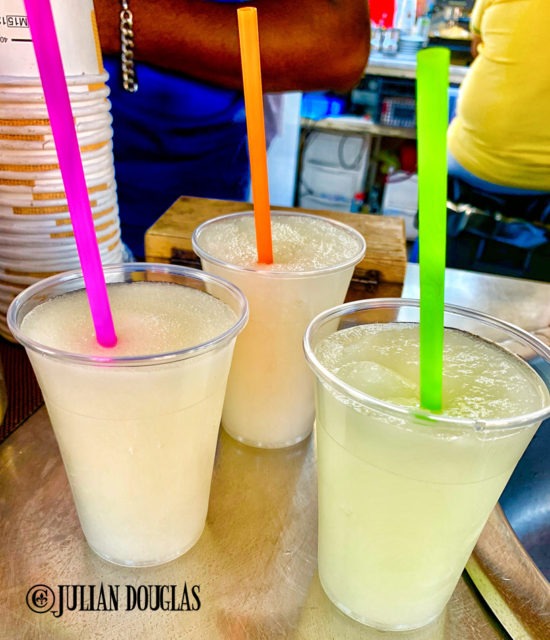 Limone e Arancia Granitas as they’re known in Italy. Lemon and orange iced drinks, perfect after a long walk through some ruins.

After Imma not only walked us over to the train station, she helped me personally get our tickets to our next stop for the afternoon, Sorrento, laid out all the details and walked us up to the platform. If that wasn’t enough, then to my surprise, pulls out a small Pompeii, hard-cover guide book she somehow purchased without us looking and gave it to me! I actually teared up, making it harder to say goodbye, yet we had to. What a day! 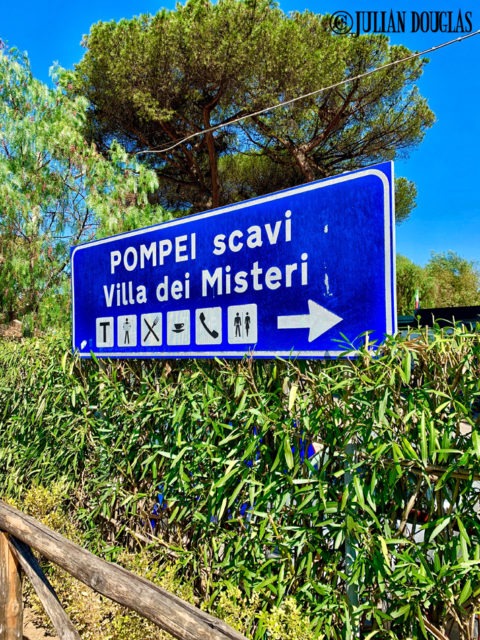 Though we were waiting at the train station, heading to Sorrento and the Amalfi Coast now, those arriving knew exactly where to head for POMPEI.

Oh, the irony. I had felt that coming to Pompeii was “throwing my wife a bone” so to speak. Mostly for her, I was going along with it. Though of course Nathan and Nicole very much wanted to see it as well. Low and behold, it was me who became captivated by all these new memories. 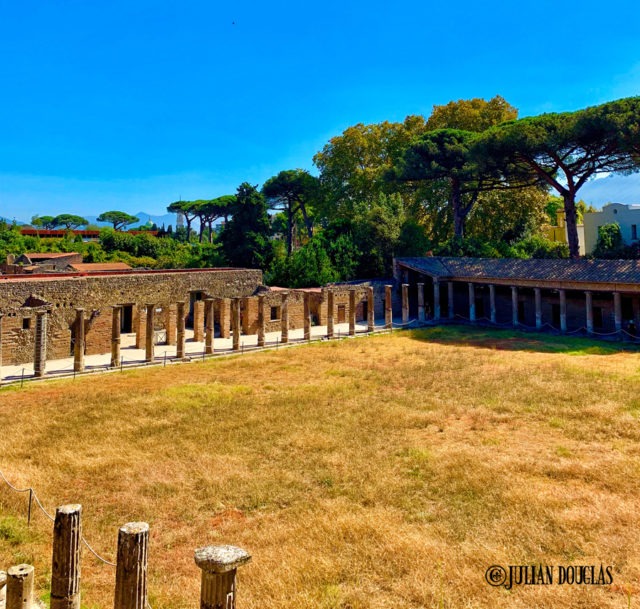 Our last view inside the ruins, the Gladiators Barracks, just as we were leaving.

Though we saw so much in just around three hours, there’s only so much we could see. Many spend an entire day at Pompeii and don’t see it all. The one spot I truly would have liked to see was the Anfiteatro or Amphitheater. The oldest surviving Amphitheater in the world has still being used in the modern day for concerts, including Elton John and Pink Floyd. They even display a rockumentary of pictures around to see. So, although I didn’t get a chance to see, make sure you do. 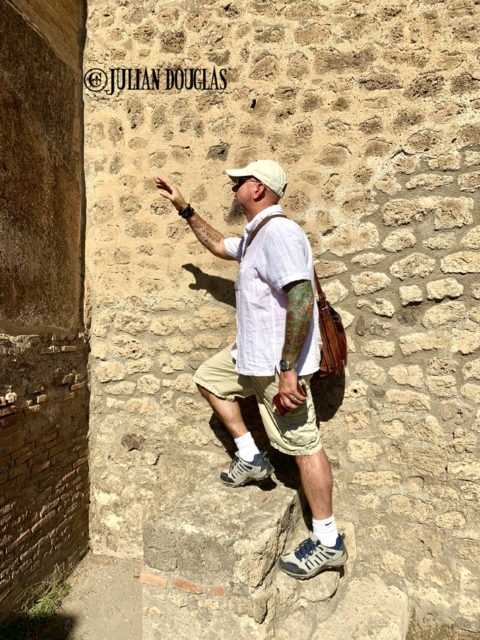 There are endless places to explore in Pompeii, even if your stairs run out… just ask Nathan!

Traveling the world, I’ve always been drawn to visit historical sites, to be in those spots where so many have come before. You see many locations in movies and TV, toured through on travel shows, but, nothing can ever take the place of seeing them in person. Italy is a must-see country and Pompeii is truly a must experience destination. More importantly, it’s one you must choose to do right. Make Pompeii an unforgettable experience as we did. Take a private tour, make a friend, learn the history, remember the stories. LivItaly, was the difference between seeing Pompeii and living it. 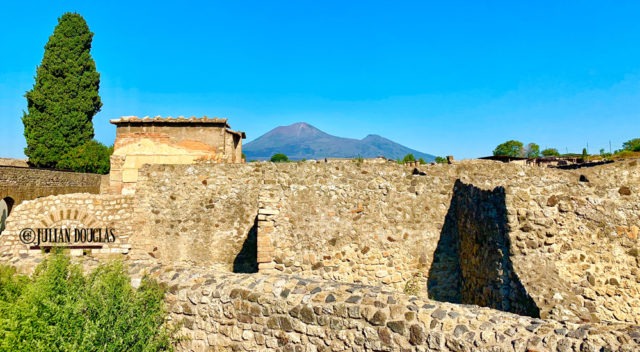 What’s missing from this breathtaking view? You! So contact LivItaly Tours before you visit Italy and you could be standing right here. 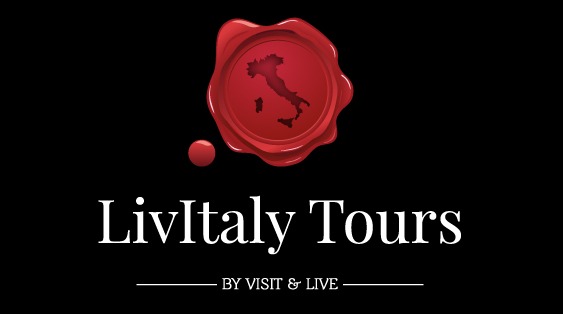