Fairytales do come true. Ok, well maybe you won’t meet your Prince Charming or Snow White, but you will be treated like a King and Queen if you attend Afternoon Tea at The Plaza in the famed Palm Court in New York City. 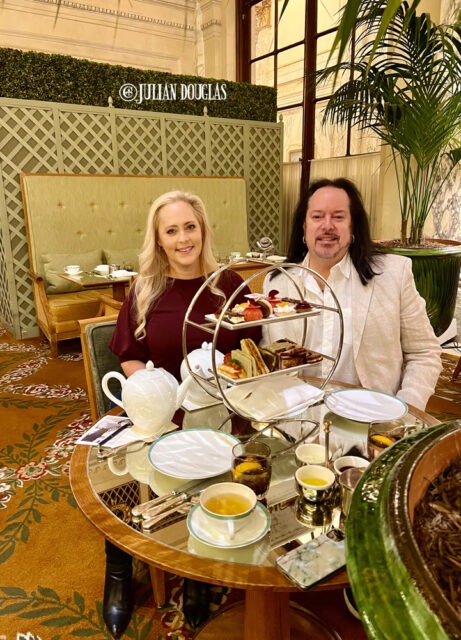 For lovers of Afternoon Tea, The Palm Court at The Plaza is the grandest of them all.

If you’re traveling to The Big Apple, there’s nothing more iconic than doing Tea at The Plaza Hotel, situated across from beautiful Central Park. 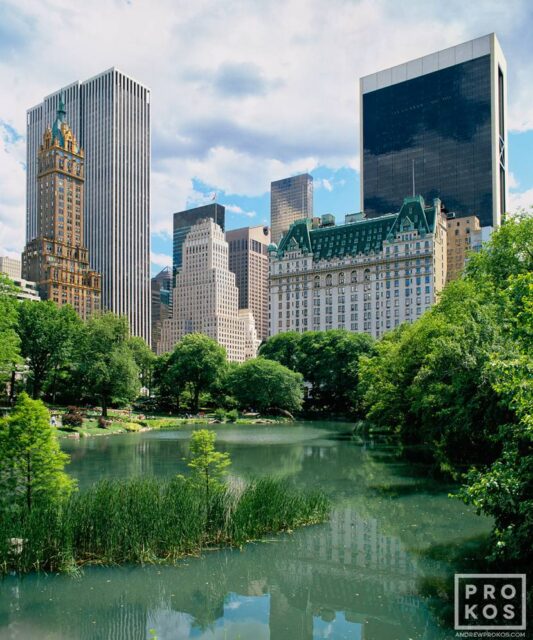 Especially if you spent the morning enjoying a scenic walk around legendary Central Park, you’re sure to have worked up quite an appetite. 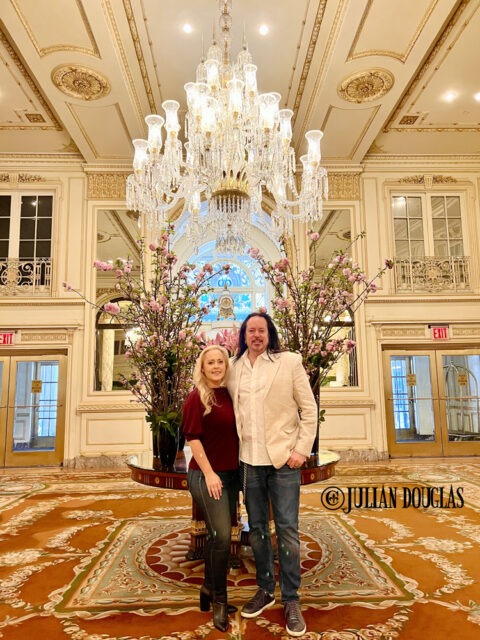 Before you even get to The Palm Court, this is what greets you entering The Plaza.

The Plaza is the granddaddy of them all. In fact, there’s a reason most agree Afternoon Tea here is still the number one place in America for this experience. Seeing that The Palm Court opened in 1907, and they have been doing the traditional English High Tea for 115 years, you can see why it still holds the test of time. 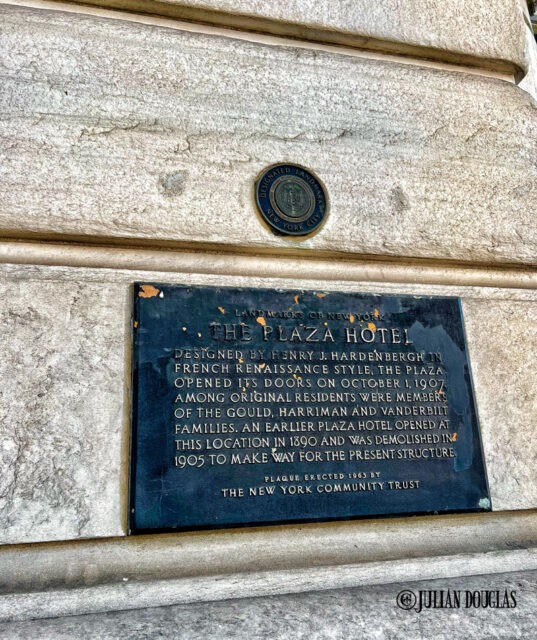 Of course, The Plaza is a designated landmark. Now see if you can find this plaque outside.

It truly is the epitome of tradition, service, and of course delicious fare. Not to mention thee most grand and stunning setting. 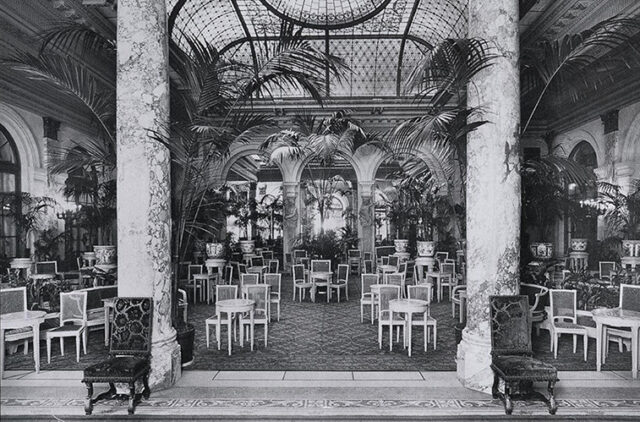 How The Palm Court looked when it first opened, with all its early grandeur. (picture courtesy of The Plaza)

The Plaza originally opened in 1912, and through a few name changes over the century, it became a Fairmont Hotel in 1996. Then, in 2013, renowned architect Thierry Despont renovated The Palm Court to its vintage look; including, a soaring stained-glass dome, reminiscent of the original built back in 1907. 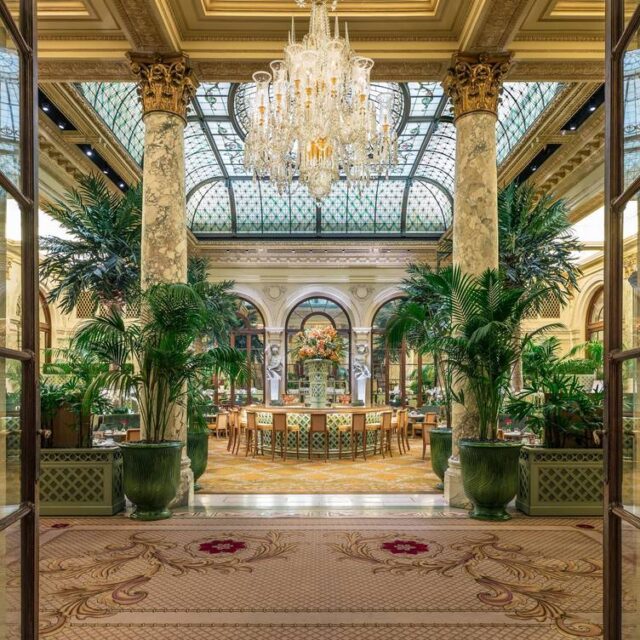 Fast forward to how it looks today. (picture courtesy of Open Table)

The room is filled with lush potted palms, and ceiling-high palm trees, thus where it got its name. Along with fragrant orchids, and many other pretty flowers, marble columns, and of course a magnificent chandelier. It really is an amazing room. 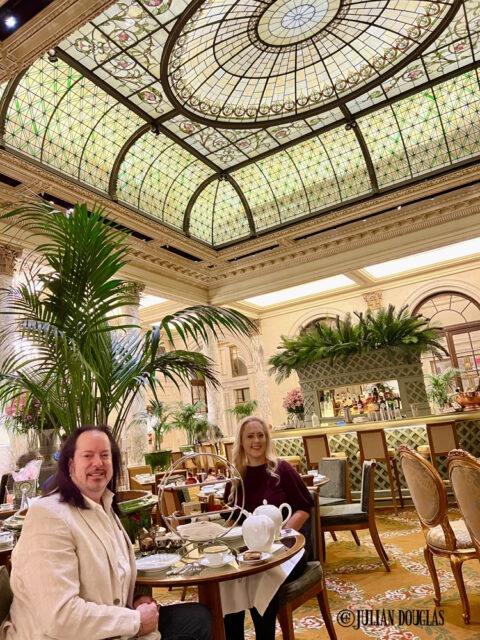 Views of the central bar and of course that incredible dome.

But let me talk about the fare. This is more than just sandwiches, snacks, and desserts. These are carefully prepared delicacies, skillfully and meticulously made by an award-winning kitchen. Those desserts are an array of treats filled with sophistication and charm, with a little playfulness thrown in by Executive Pastry Chef, Matthew Lambie. 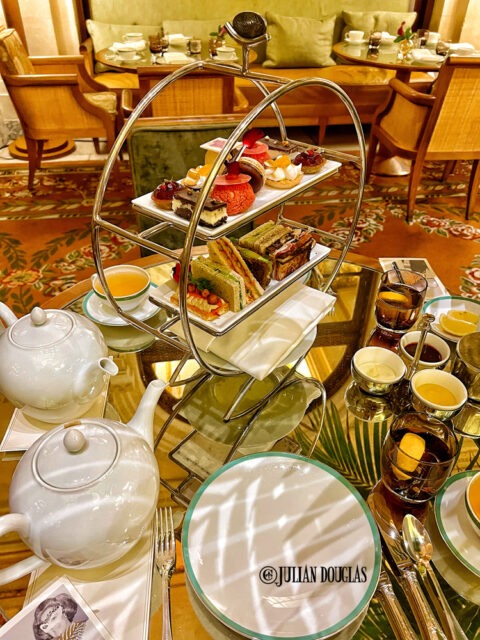 This is what it’s all about. Decadence at its best.

The food is fantastic but let’s not forget the star, after all, the tea. A 25-variety collection of teas by Palais des Thés tea and the true masters serving it. Yes, of course, the service here is something special, but their knowledge of the teas and the infusions they create just add to the experience. 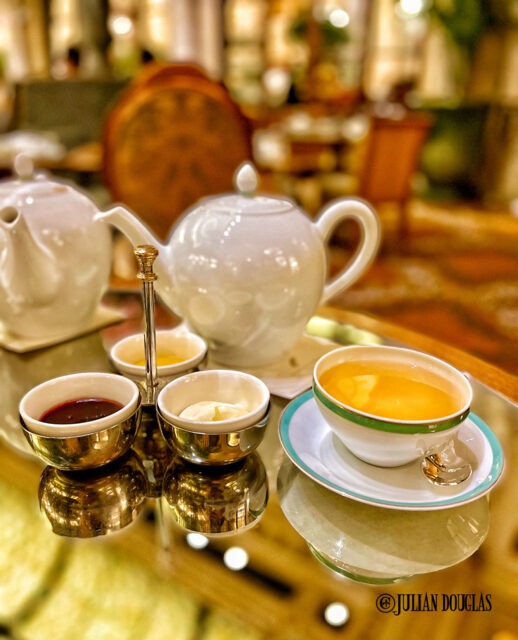 If you’ve never tried high-end tea, you’re missing out. Oh, and those toppings for the scones, are yummy.

There are three “Teas” to choose from. The Manhattan Tea, the Signature Tea which is often a Seasonal Special, and the Grand Imperial Tea. 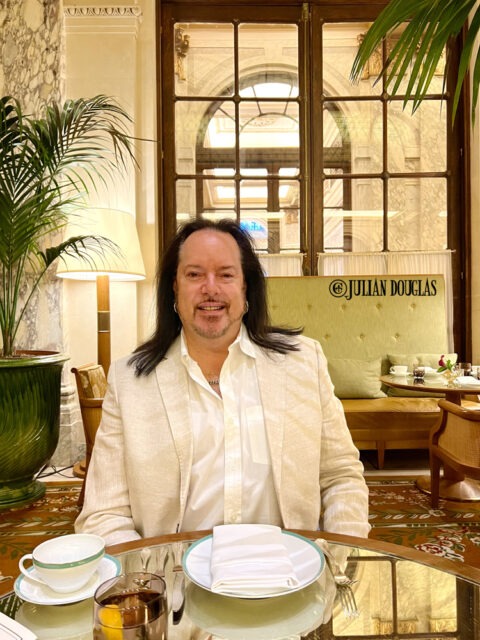 A proper gentleman for a proper tea. 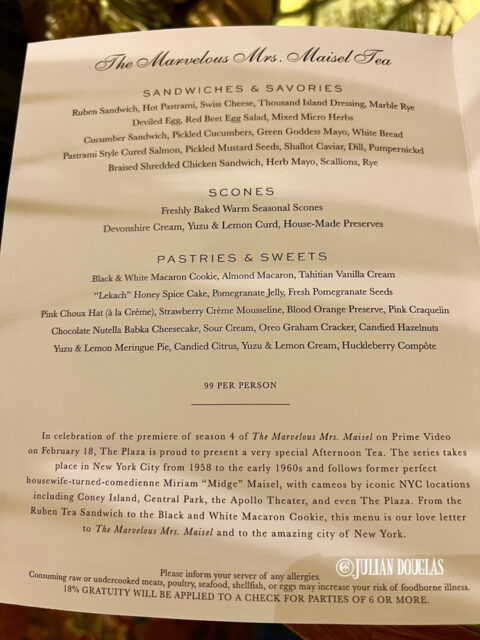 The Marvelous Mrs. Maisel Tea menu. How fortunate this was being offered when we were there. 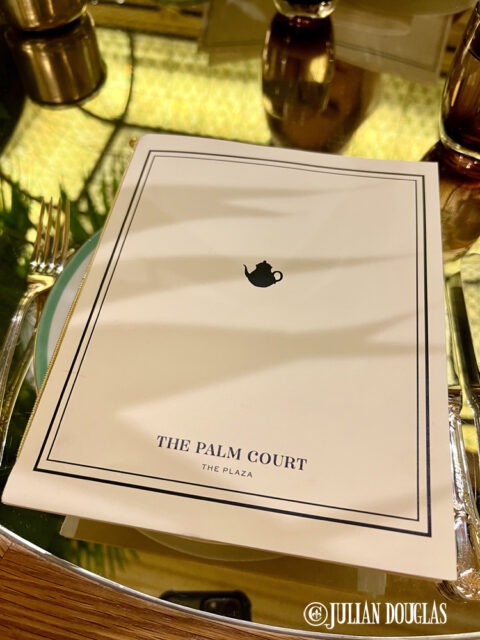 When this is placed in front of you, the excitement only builds.

My wife Nicole enjoyed their vegetarian option. They simply swapped out my meat sandwiches for all vegetarian ones. Including Cucumber Sandwiches, and a Honey Ricotta with pesto, baby kale & walnut on rye. 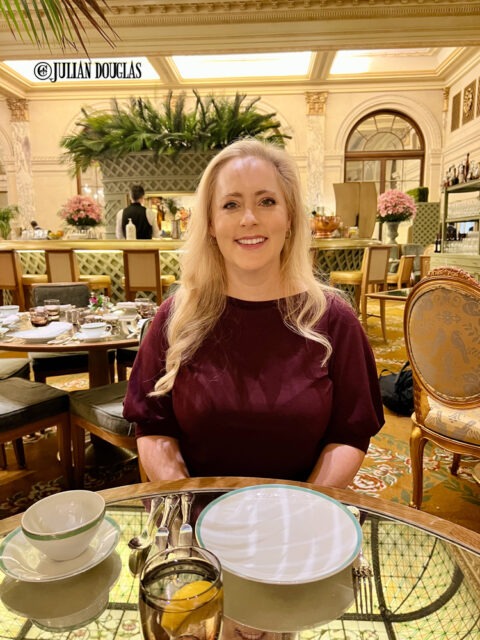 My wife Nicole is made for Afternoon Tea, and she couldn’t have been happier. 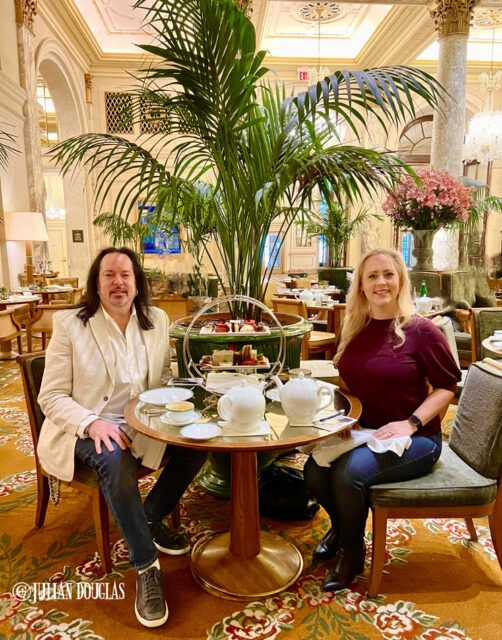 A truly memorable time, which Nicole and I hope to repeat next visit.

They even have a gluten-free option available as well. Which normally we would choose, but come on, this was the place to cheat a bit, ok, a lot. At least, they have everyone covered these days if you choose. 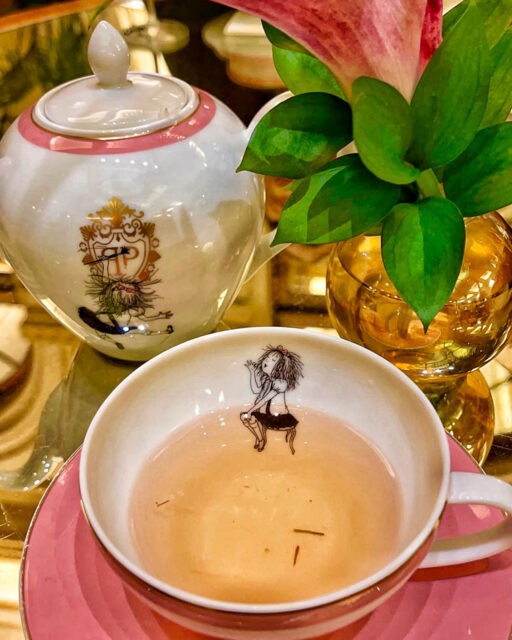 In case you hadn’t noticed, the china is so fabulous too. (picture courtesy of the Vertucci’s)

For our tea, thanks to our incredible server Kazi, who by the way helped make this the phenomenal experience that it was, we went with an infused tea blend, thanks to his suggestion. Which featured the Tropical Garden. There’s something so special about a high-quality, wonderful tea while eating scones covered in Devonshire cream. 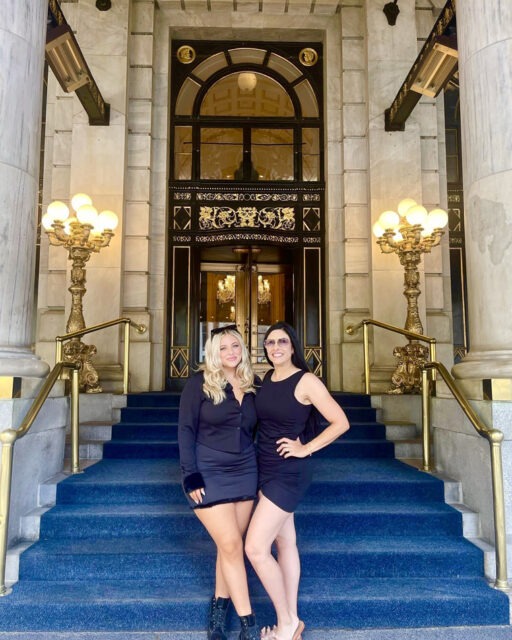 The highlight of their Daughter-Mother trip. (picture courtesy of the Vertucci’s)

What really made this even more special, is my social media pictures and a description of our visit had close family friends book reservations for a few weeks later as they too were coming to Manhattan. 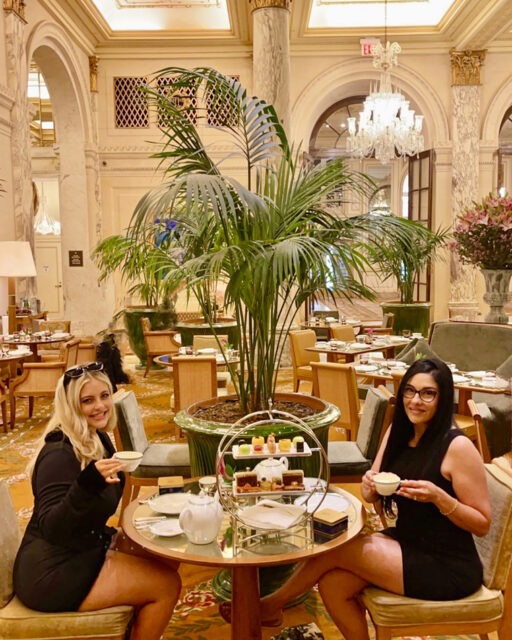 Instantly Angelina and Gina fell in love with Afternoon Tea at The Palm Court. (picture courtesy of the Vertucci’s)

Gina and Angelina also had the pleasure to have Kazi serve them. Along with runner Kayin. I’m not sure if it was my heads up to The Plaza, but chances are it was just what they do as you would expect, taking their service to another level. 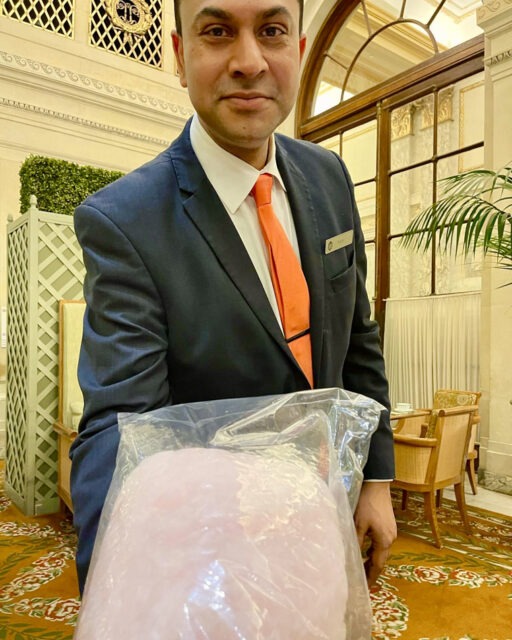 Kazi surprised the girls with cotton candy. (picture courtesy of the Vertucci’s)

Kazi really adored them both, as they received a little present of cotton candy and a glass of Duval-Leroy Rose Prestige Champagne. We didn’t even get that extra treat. They both really impressed the girls so very much. 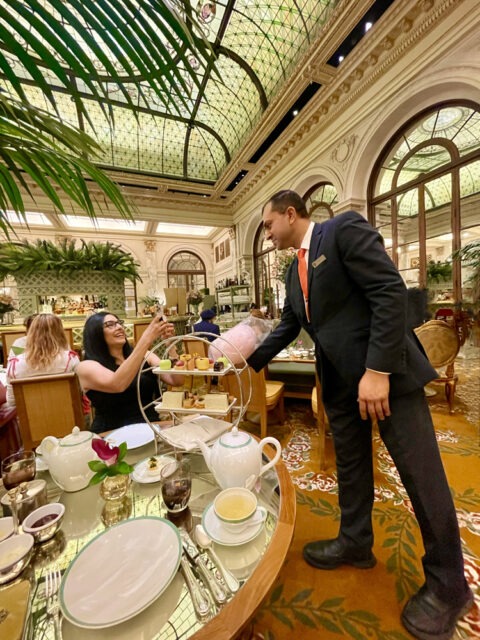 That amazing moment is being captured from every angle. (picture courtesy of the Vertucci’s)

Those weren’t the only two that impressed them. The management team also did. Sugar who was recently promoted went above and beyond, as did Caitlyn. So impressed by all, both Gina and Angelina returned the next morning to do an early breakfast. Also, we’ve had many friends, and many of my followers even go now. 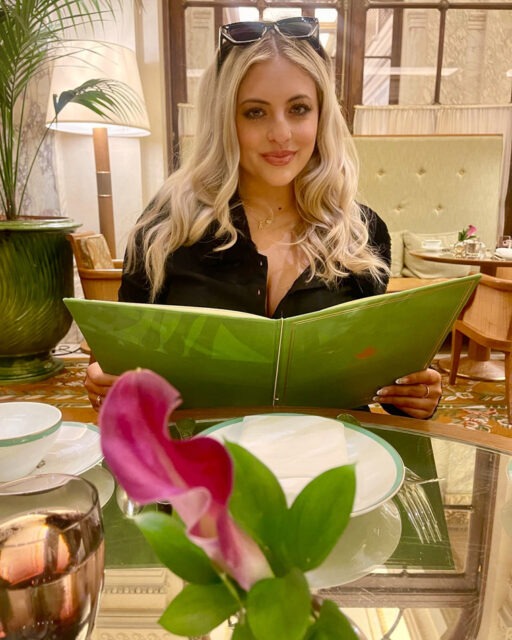 Angelina was so happy, let alone excited to be at The Plaza, yet still had no idea just how phenomenal the afternoon would be. (picture courtesy of the Vertucci’s)

Afternoon Tea for all of us was simply a phenomenal experience. As you can see, you couldn’t take the smiles off any of our faces the entire time at The Plaza. Yes, the food, the ambiance, but the top-notch and genuine staff of Palm Court. 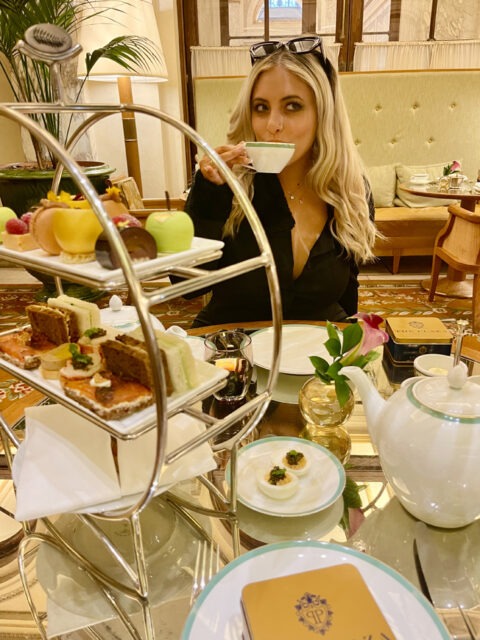 Literally Heaven on Earth for Angelina… actually, all of us who have done Afternoon Tea at The Plaza. (picture courtesy of the Vertucci’s)

It’s not just a meal or lunch. It’s an opportunity to step back in time, to be a part of history in ways. That feeling of being a New York socialite over a hundred years ago. It’s like playing the part that so many have in movies and television. Except it’s for real. 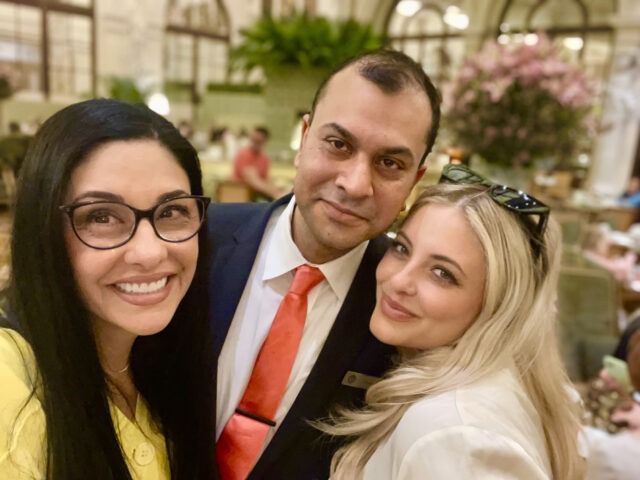 We were so fortunate to have Kazi as our server, and Gina and Angelina having him too, just made it more amazing. (picture courtesy of the Vertucci’s)

Lastly, I heard people tell us it’s expensive, and yes, to many it is. However, there are times when you need to splurge, to treat yourself. For Nicole and me, it was our Wedding Anniversary, for Gina and Angelina, it was a special Mother-Daughter trip. Yet, we all will return “just because.” I can’t stress enough; that you should do the same. It is an Experience that will last a lifetime… one you deserve to have. 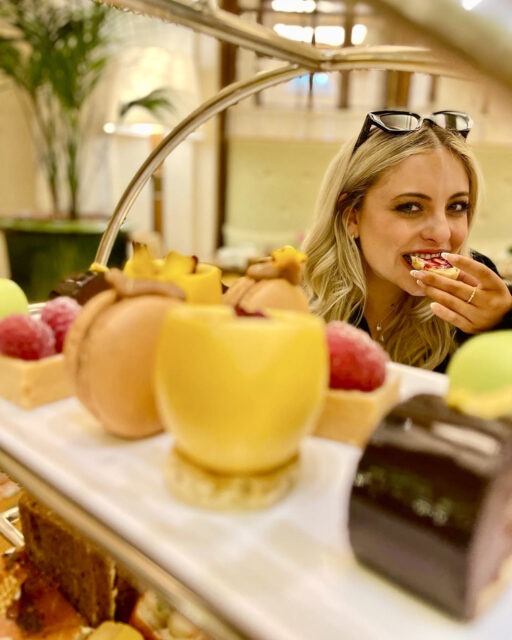 This has to be my favorite picture of all. Yes, it highlights a few of the tasty desserts, but it’s that sheer pleasure we all experienced, being captured right here with Angelina. (picture courtesy of the Vertucci’s)

Hopefully next visit, we’ll have the opportunity to stay at The Plaza and I’ll get the chance to share with you all the experience of being a hotel guest there. 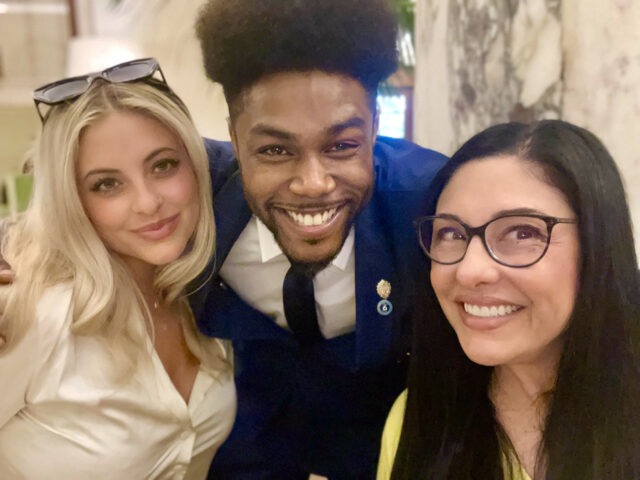 Angelina, runner Kayin, and Gina, all with wonderful smiles for good reason. (picture courtesy of the Vertucci’s) 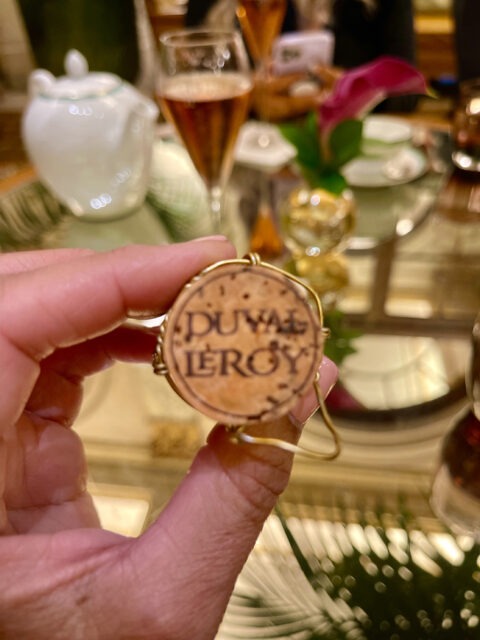 A nice souvenir, the cork from their Duval-Leroy Rose Prestige Champagne. (picture courtesy of the Vertucci’s)

The Palm Court at The Plaza Hotel 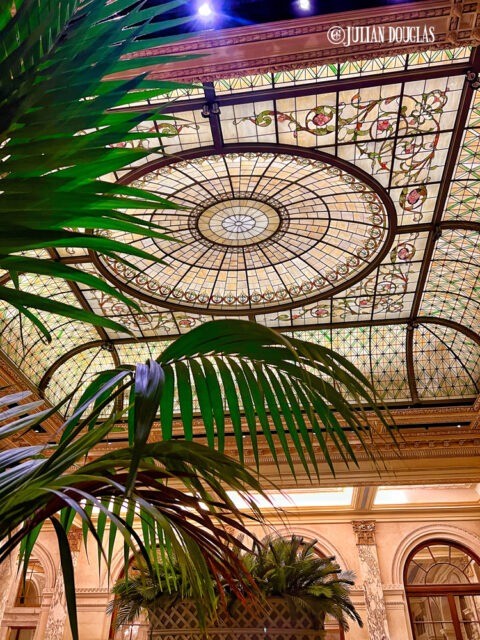 If you’re looking around or simply look up, you’re sure to be impressed with such beauty.