An interview with Don Dokken of Dokken

Back in 1984, my senior year of high school, I was with a group of friends driving out to Las Vegas for a road trip when our car broke down in the middle of the desert. After hours sweating in the blistering sun a tow truck arrived. He spent over 30 minutes trying to hook the car on to his truck, when finally he said “You know what the problem is you guys, there’s no metal in there.” Instantly one of my crazy buddies shouts out at the top of his lungs… “Are you kidding, there’s some fucking Dokken in there !!!”. The tow truck driver looked perplexed and we all held in our laughter, however from that point on I had no idea that the name Dokken would forever be etched in my brain. 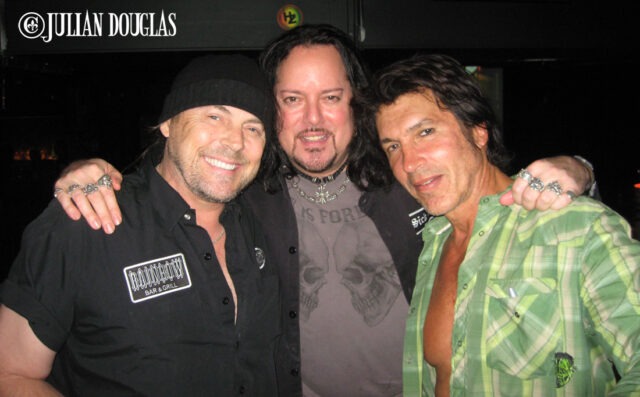 Don came down to check out George Lynch’s latest project at the BriXton – South Bay back in August of 2009, which lead to this awesome picture.

Well only a few years later I met Don Dokken, living in the South Bay of Los Angeles, which surprisingly was the home to members of many of 80’s bands, including Motley Crue, Ratt, Warrant, Great White, Bullet Boys, Silent Rage and Dokken to name a few. By that time of course, the band Dokken had become one of the worlds most known Heavy Metal bands of the 1980’s. By the decades close, Dokken had been nominated for a Grammy Award, had multiple Gold albums, 3 Platinum albums and sold over 10 million records. Not to mention one of Metal’s coolest honors of the 80’s, having a top selling single from a major motion picture, that being Dokken’s hit single “Dream Warriors” from “Nightmare On Elm Street 3: Dream Warriors”. 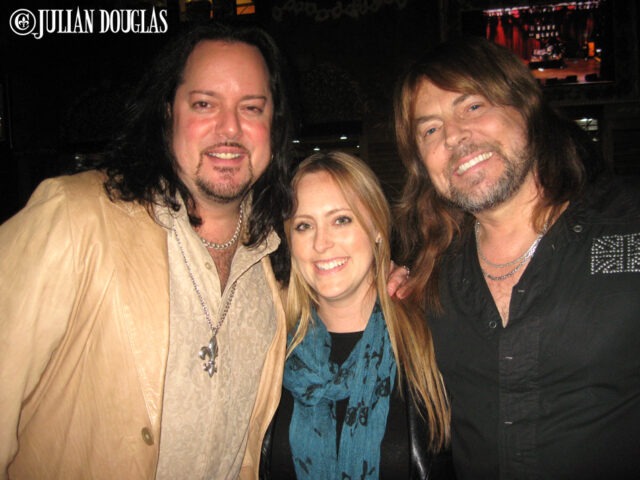 My wife Nicole & I hanging with Don after his show at the House Of Blues – Anaheim, November 2009.

Don Dokken can be proud of his work with Dokken, the band he founded back in 1978 and to this day, is still performing and recording with Dokken as strong as ever. In fact, Dokken released it’s late album on September 25th, 2012… My Birthday (to which I was flattered for the preset, lol). Dokken’s songs are etched in Heavy Metal, especially Don’s vocal style, which has carried over with his solo career as well. Then add in his years of producing with great bands as well. Needless to say, I’ve been a great fan of Don Dokken, but where I’ve been honored, is to of been able to call Don a friend for over 20 some years. Exactly why I couldn’t wait to sit down with Don for my first Q & A with “Mr. 80’s” for Listen, Journey, Savor. 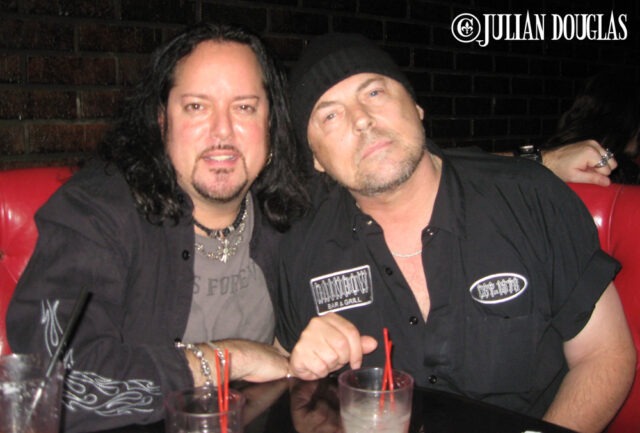 1) Back in the late 1970’s when you were playing the clubs in Los Angeles, if someone would of told you, going into 2015, you would be touring and performing in some of the greatest venues around the world, what would you of said AND how does that feel to be doing that now?

Don Dokken: … I would have never believed it. I owned an auto body shop and playing was just for fun on the weekends. Looking back, I thought if we could sell out the Whisky A Go-Go, we would have accomplished our goal.

2) Like many musicians, you’ve covered other artists songs which have landed on various albums of yours. Are there any songs you’ve always wanted to cover, that you haven’t yet and might do?

Don Dokken: … I love doing songs from the British Invasion days. That’s why we’ve done “Bus Stop” by The Hollies, “Lies” by The Knickerbockers, “One” by Three Dog Night and so on. I’d like to do a The Beau Brummels song “So Tired”, that would be fun. Mick and myself are huge fans of this era, basically The Beatles era. 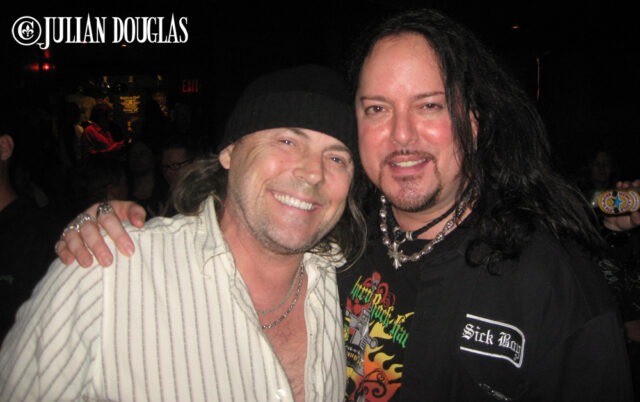 3) The 80’s had their versions of the “Super-Groups” and projects, such as Bad English, Damn Yankees, Mr. Big, Contraband, Arcade etc. If you could of put your own “Super-Group” together, who would of been in it?

Don Dokken: … That’s a hard call. There are to many musicians that I respect to pick.

4) An unpopular trend for the fans these days, is seeing many bands from the 80’s tour as 2 different versions, such as Great White, L.A. Guns, Faster Pussycat, Bullet Boys & Bang Tango to name a few. What’s your take on this?

Don Dokken: … They have to make a living. I understand when original members can’t pull it together. I’m an expert on that issue unfortunately. 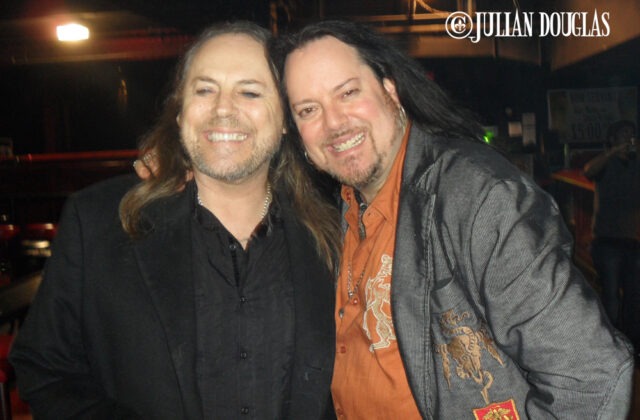 Feeling happy to say the least, lights on & 2am after Don’s last show at the BriXton – South Bay, December 2011.

5) Many people might not know that back in 1981, while in Germany, you sat in on rehearsals for the Scorpions “Blackout” album because Klaus Meine was having vocal cord problems. Though Klaus recovered to record the album, your background vocals were still used on the LP.
You yourself have also had to have vocal surgery to fix problems with nodes and tears in your vocal chords. How are you these days and any worries about dealing with it again down the line?

Don Dokken: …I worry about it every show. Some singers are blessed, like Bruce Dickinson, Ronnie James Dio, Glen Hughes and others, they all kept there range and so on. But like Pavoratti, who never smoked and took really good care of his voice, he lost his range when he got older. It’s just the luck of the draw. My range was all there until I was almost 50, but I took my gift for granted and paid the price. I had surgery in the 80’s from cronic sinus infections, and no it wasn’t from doing coke, LOL.

6) Some people might not know that you’ve been a producer for much of your career too. Over the years, who have been some of musicians you’ve really enjoyed working with AND some you hope to one day?

Don Dokken: … I liked working with them all. I was trying to help bands that needed a break, some made it some didn’t. XYZ was one of my best producer efforts. I would like to produce Michael Schenker !!! 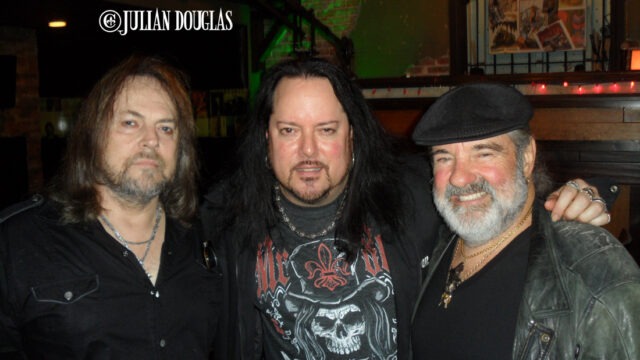 Getting a photo-op during Don’s Meet & Greet after his Saint Rocke show, December 2012.

7) Who were some of your favorite singers and musical influences growing up?

Don Dokken: … Dio, Rob Halford and Ian Gillan had a big impact on me. When I first heard Judas Priest’s “Sad Wings of Destiny”, it blue my mind. I loved Saxon too.

8) That being said, what modern singers these days are some of your favorites?
Don Dokken: … The guy in Nickleback (Chad Kroeger) rocks, Dave Grohl (Foo Fighters) also !!!

9) Any quick advice to all those young singers out there?

Don Dokken: … Most important… don’t smoke. Always warm up before a show and don’t talk loudly ‘ever’. All of these things I’ve done and paid for it. I’ve found that talking loud in a bar or in a crowd really kills your voice. I’ve even heard you hoarse from talking in a loud club all night.

10) You’ve always been one to never seem to slow down, so what’s next with Don and/or Dokken, we can all look forward to?

Don Dokken: … I’m too old to work on cars, so I guess singing and writing songs is my future until my voice gives out completely, which I hope won’t be for a while. I can name a dozen awesome famous singers that don’t have there complete range anymore, its just life. But they keep going. Its a rush to be on stage, there’s nothing like it, so I keep on going. Music is my life, as was my father and grandfather, its in the Dokken genes. 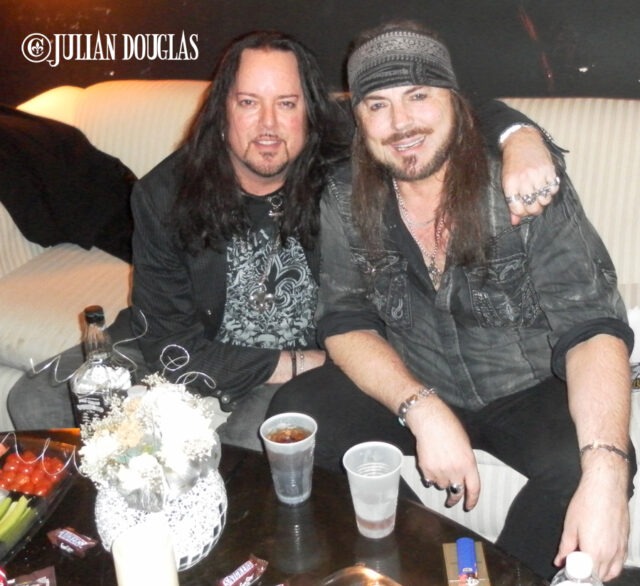 In the Green Room prior to Don’s show at the BriXton – South Bay, November 2010.

Bonus Question #1) With all the interviews you’ve done over the years, what’s a question you would like to be asked, that you never are? And of course, answer that.

Don Dokken: … The question would be… Did you succeed from your talent or was it just luck? The answer would be 50/50.

Knowing you since the 80’s, we’ve had lots of great times together. One of my favorite memories came in November of 2001, when Silent Rage was opening for you at the Galaxy Theatre in Orange County. Somehow the backstage fun found us ending up at Mr. J’s at last call for drinks & dancers… I’ll leave it at that, lol.
Bonus Question #2) Are there any fond memories of all your years in the business, with all the people you know, that come to mind?

Don Dokken: … Playing “Monsters of Rock” with the Scorpions, Van Halen and Metallica, that was awesome. We were all friends and it was interesting that in 1977, we played with Van Halen at the Starwood. Then in 1981, I sang on the Scorpion’s “Blackout”. Then I was with my manager watching Metallica at the Troubador the night he signed them. So then almost 10 years later we were all sharing a stadium stage in front of a 100,000 people a day… fate is truly stranger than fiction. 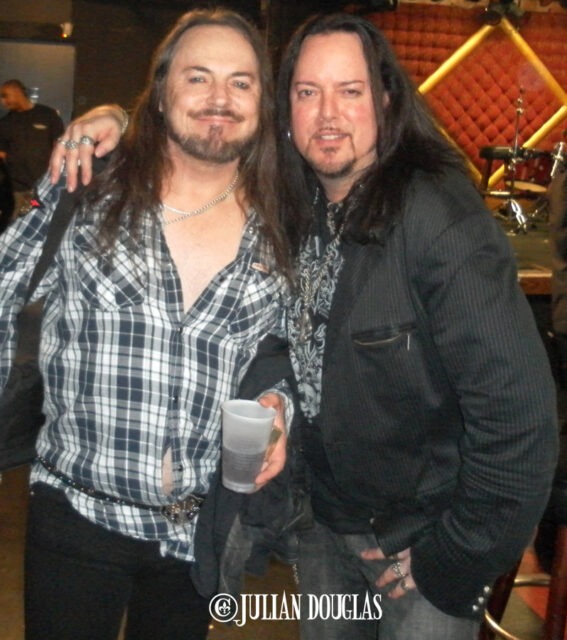 One last drink after another fun night with one of Don’s shows at the BriXton – South Bay, November 2010.

1 Response to An interview with Don Dokken of Dokken