Posted on February 2, 2017 by Julian Douglas 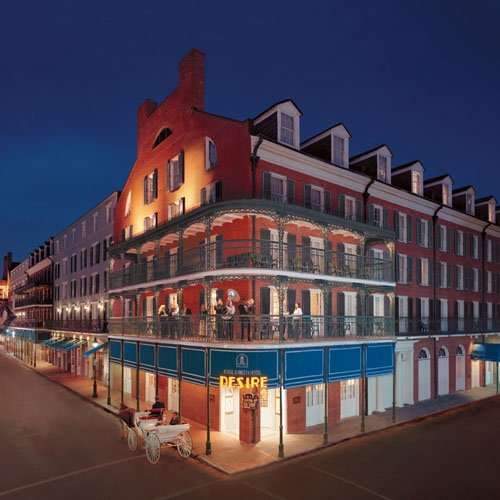 When I wrote about the Royal Sonesta Hotel in New Orleans a few weeks back, I mentioned how I could write a four part piece just about this particular hotel due to the fact there are three iconic landmarks on the grounds that hold special meaning to me. Those places are Desire Bistro & Oyster Bar, Restaurant R’evolution and Irving Mayfield’s Jazz Playhouse all of which played into our Christmas time visit to The Big Easy. 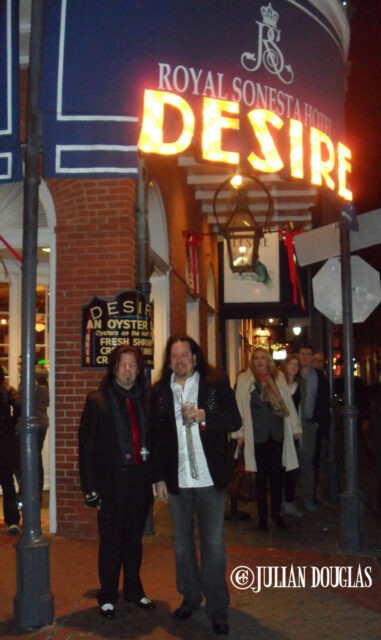 Bo and I, Bloody Mary in hand straight from Desire Bistro & Oyster Bar, ready to catch some live music on the evening before Christmas Eve.

When traveling to New Orleans during the Holidays, you’ll encounter many more pros than you will cons. With that said, some of those cons can be a hindrance, depending on what your plans are while there. The pros, well of course the endless beauty and spirit the city has to offer. In The States, I can’t think of another town that takes this time of year into their hearts the way that they do with every inch of the French Quarter decorated. From every wrought iron balcony trimmed with wreathes and lights, to Christmas trees placed in most the store fronts the Quarter radiates Christmas spirit. Plus at night you seem to hear the sound of carolers from every corner. 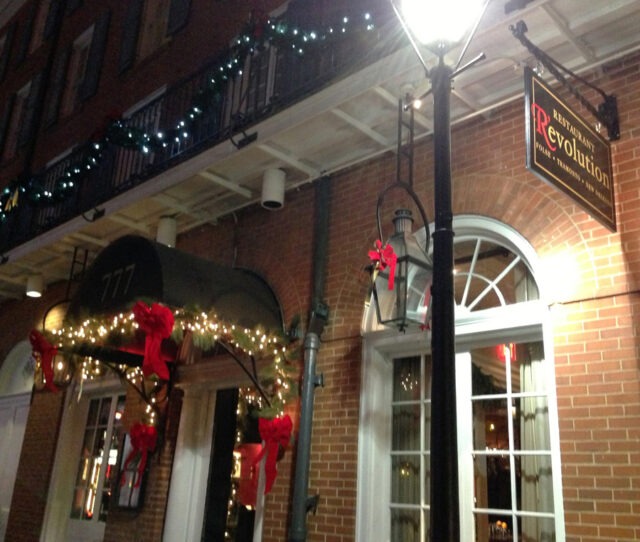 With so much joy going on, what could be a con? The big one is that most businesses shut down on Christmas Eve and Christmas Day. I know you’re thinking, of course they do, just like where ever you may live. But somehow we tend to forget The French Quarter is as much for the locals as it is for the tourists. With the Quarter filled with so many hotels, it’s hard not to think that way. This becomes a problem for about 48 hours when you’re looking for a bite to eat, or in the mood to listen to some live music. Of course you’ll find some that are open, but if you don’t have reservations for Christmas Eve or Christmas day/night, you’re going to be out of luck. That is unless you’re staying at the Royal Sonesta. 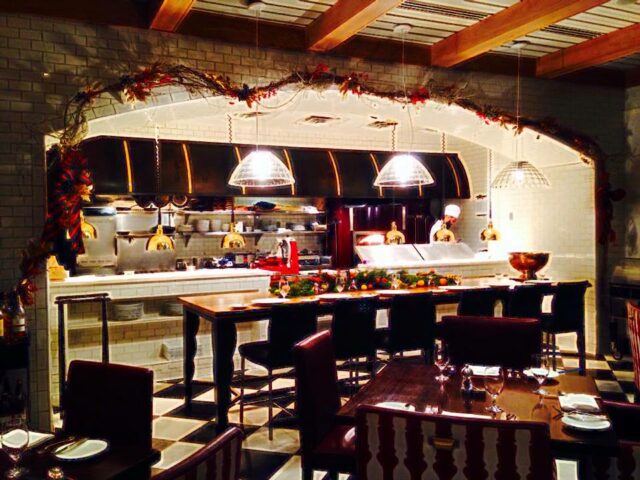 The prized seating of the chef’s table, looking right into the kitchen (photo courtesy of Restaurant R’evolution).

We really expected more places to be open, or at least figured once we arrived in town a few days before Christmas, it shouldn’t be to difficult to find a great place to eat, given the town has an endless supply of famous restaurants. That’s when we realized we were in trouble. It was Christmas Eve, we had no hope for a nice dinner. Especially an authentic Reveillon dinner, which is a New Orleans Holiday tradition. Leave it to the Royal Sonesta’s front desk girl to call over to R’evolution. 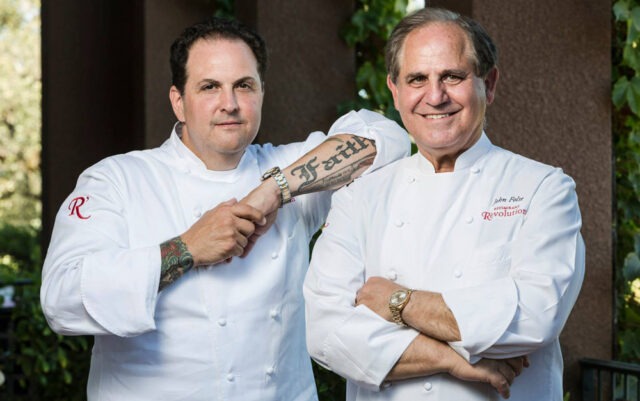 R’evolution is one of the Crescent City’s newest and most award winning restaurants. Opened by celebrity executive chefs… Rick Tromonto and John Folse. It’s hard enough on a normal night to land a table, yet they managed to make room for us on Christmas Eve. We got dressed up, walked across the lobby, through the outdoor courtyard and into the restaurant. 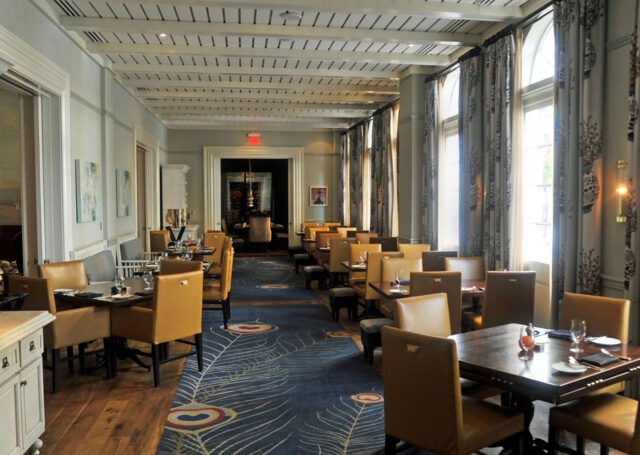 Our table was the one here on the bottom right (photo courtesy of Restaurant R’evolution).

Greeted by the hostess and brought to a nice table, combining a view of the beautiful dining room and the kitchen which is positioned for certain guests to view the magic being created. 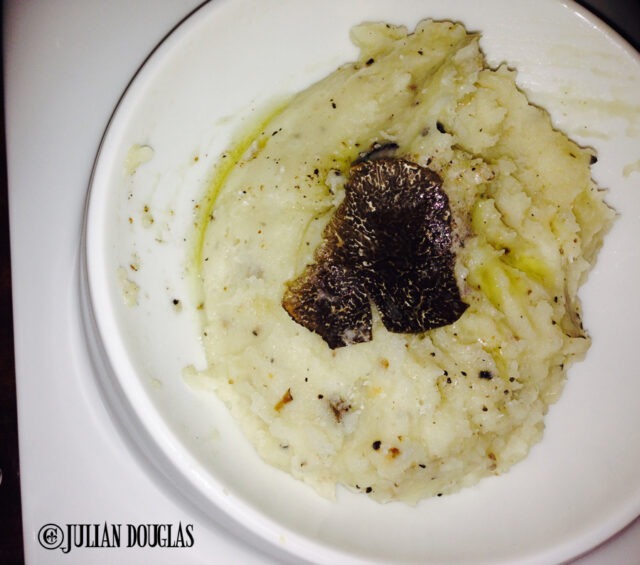 The Truffle Mashed Potatoes my wife ordered… and the picture doesn’t truly show the size of those truffle shavings !!!

With any fine dining establishment, let alone one in New Orleans, you expect a certain level of service, more than professional, but personable. R’evolution lived up to that in every way. From the minute we arrived to the moment we left. But the food, that’s what will leave us, especially myself, with a wonderful lasting impression. Starting with the complimentary Hamachi amuse-bouche that melted on my tongue, followed by beer-battered crab beignets, scrumptious, on to the rooster gumbo, thick, rich, luxurious as can be. 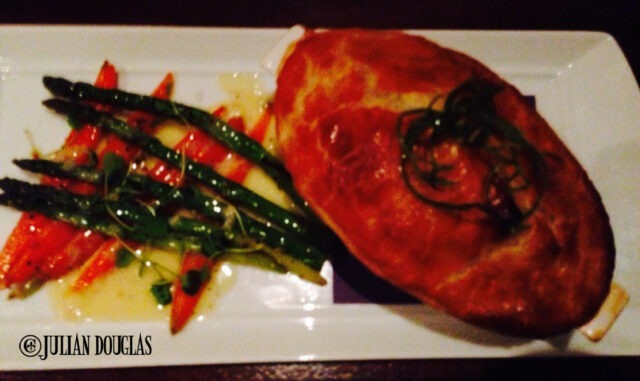 The christmas Eve special, a Wild-Game “pot pie”. Though I’m not sure if that was the correct name.

As if this meal could not get any better, oh it could, and it did. One of their specials for the evening was a wild game pot pie, it’s hard to describe… rustic, refined, savory, exotic and delicious. I had never seen it on a menu before nor again, so I’m glad I ordered it, especially on Christmas Eve. 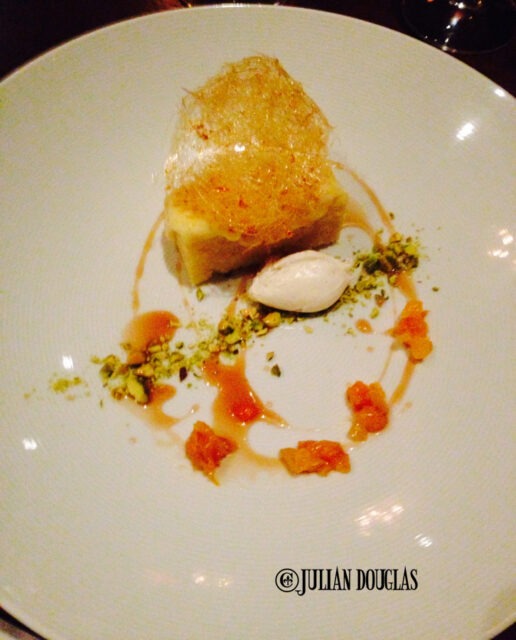 Just one of the deserts we ordered… perfection.

We then shared a few deserts to wrap up this incredible meal. Almost afraid to eat them, for they were so elegant in appearance, but did look too good not to dig into, which we did.  Restaurant R’evolution… you are now one of my favorite places to dine while in New Orleans, and that is not an easy list to be up on, yet you are. Thank You for a Christmas Eve never to forget. 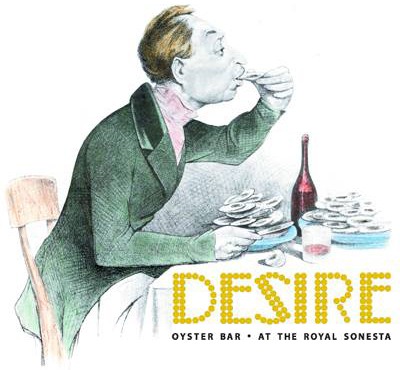 One of the vintage Desire Oyster Bar posters.

If you remember my “Part 1” on the Royal Sonesta, we were just as stumped on finding a place to eat on Christmas night. That was solved easily enough by the front desk again. That same gal asked if we were familiar with Desire Seafood & Oyster Bar, as it was known then. We told her we had eaten lunch there a couple days back and loved it. She suggested we let the maitre de know we were guests of the Sonesta, which we did, and instead of waiting in a long line, were seated right away. 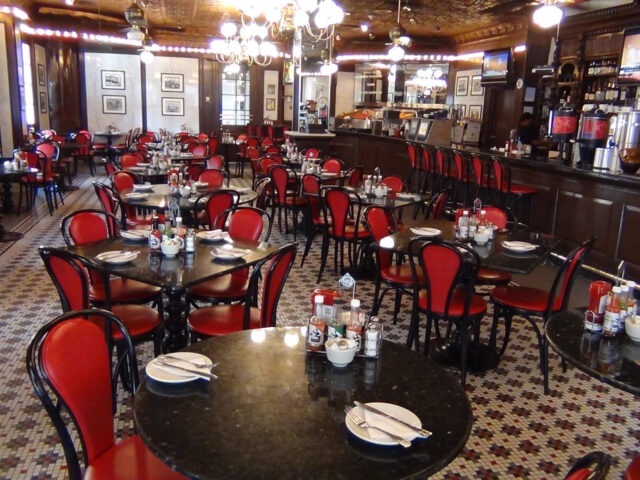 That classic dining room of Desire’s. However, it was closed for remodeling, so not sure of the changes now. I hope it holds this great look (photo courtesy of Desire Oyster Bar).

During our prior lunch visit, we fell in love with not only our server, your classic local, sweet as she could be, warm and inviting, but of course the food. True Nawlins fare. The first visit I ordered their Creole Trio – Jambalaya, Gumbo and Red Beans & Rice. Their Creole, tomato based Jambalaya was hands down the best I’ve ever had in New Orleans, and that’s saying something. 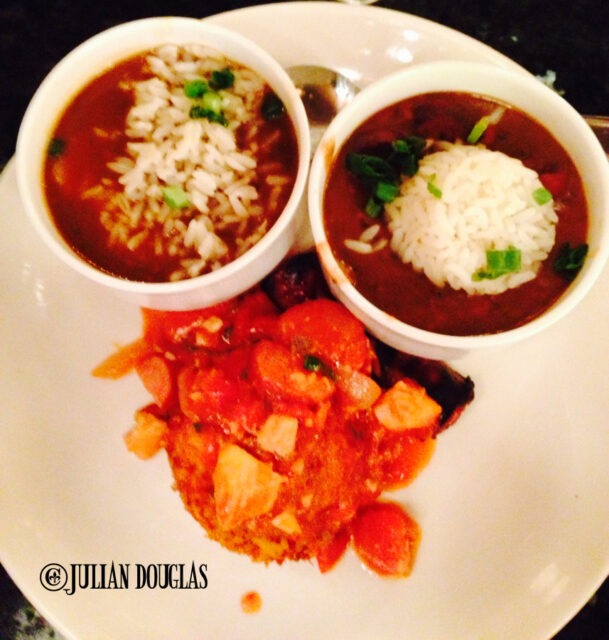 Desire has been long known for their oyster bar, but the whole menu is classic, simple and fantastic. Lucky for us that same wonderful server was working again, I wish I could have remembered her name. She remembered us, gave us all big hugs and grabbed us menus. I indulged this time in the full order of the jambalaya and couldn’t get enough. Now it was time for a cocktail. She surprised me, telling how she makes a great Bloody Mary. I’m a sucker for a good one, and let me say, of all the incredible ones I’ve had in New Orleans, this was the best yet. 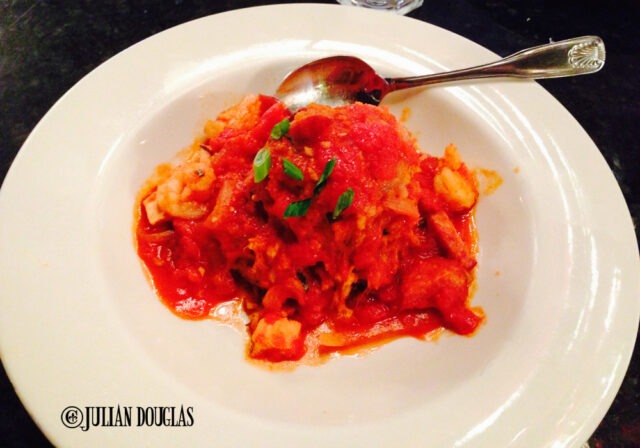 Between the homemade mix, the right Cajun heat and best pickled green beans I’ve tasted, this was number one. A little bit of information… since we were there, they shut down for a remodel and I heard that they have revamped the menu and filled it with new delicacies to compliment along their classic staples. I can’t wait to go back and give an update. The name is now Desire Bistro & Oyster Bar. 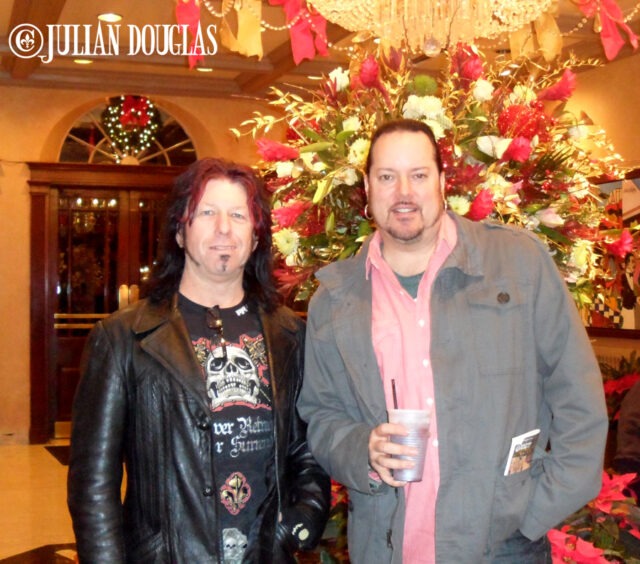 Bo and I in the lobby of the Royal Sonesta, Bloody Mary in hand, ready to walk into Irvin Mayfield’s.

We were in such great spirits we wanted to keep the night going and after leaving Desire walked back inside the Royal Sonesta. In the lobby is the entrance to another recently opened place, Irvin Mayfield’s Jazz Playhouse. Not only is Irvin a local Jazz legend, but he’s been serving as the Cultural Ambassador to the City of New Orleans and the State of Louisiana. His club already has featured jazz greats and that continued this Christmas night when we walked in to catch none other than Jason Marsalis, member of the famed New Orleans Marsalis jazz musical family. 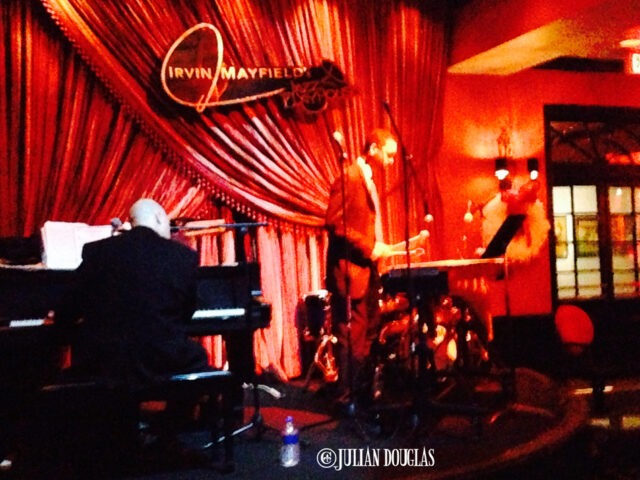 We relaxed, enjoyed some great jazz and adding to the wonderful evening, was when I told the server about the great Bloody Mary I had next door. She took the time to go next door and have it made at Desire and delivered to me, that’s what I call that special touch you get from the Royal Sonesta and all the places within its grounds. 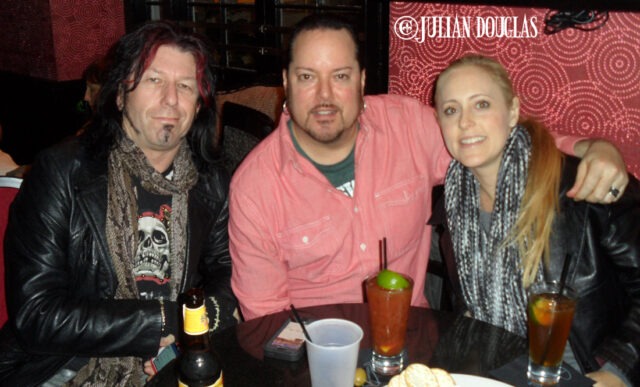 Bo and Nicole & I, enjoying our cocktails and jazz on Christmas night.

This is more than a hotel as I’ve stated, it’s a destination must if you’re coming to New Orleans. The Big Easy has endless great food and music located throughout the French Quarter, and the neighboring communities, but it never hurts to have three greats all in one place. Plan your visit here and you’ll see for yourself… enjoy. 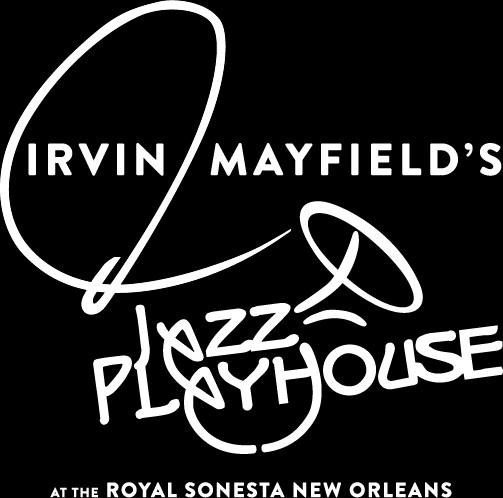