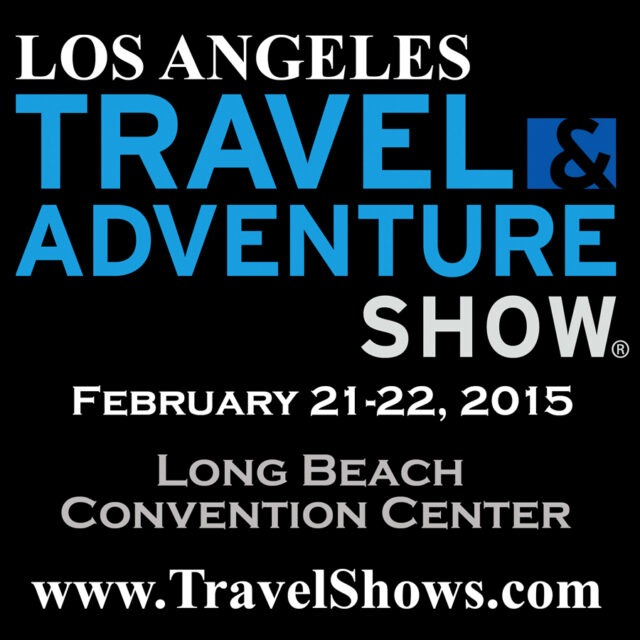 This past weekend I was honored to receive a Press Pass to cover this year’s Los Angeles Travel & Adventure Show at the Long Beach Convention Center, the perfect venue with a spectacular view of the ocean, in Long Beach, California on February 21st & 22nd, 2015. It’s an event I’ve attended before and was truly looking forward to this year’s 10th Anniversary Show. Receiving Press credentials was only icing on the cake, thanks to the emergence of this blog. 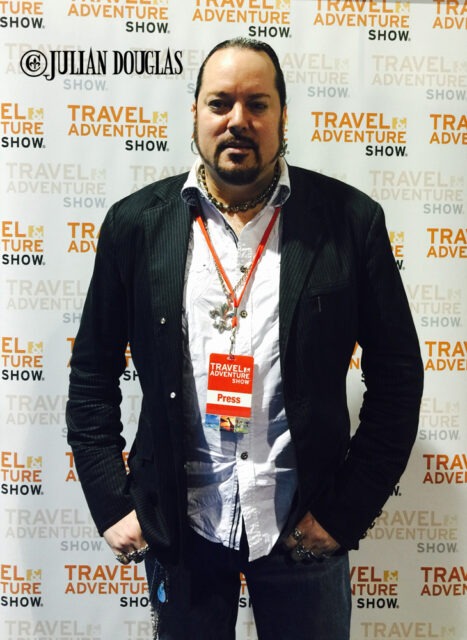 Posing for a picture with Press pass on, the spot where later all the travel celebs would stand.

If your are a fan of travel, then there’s no other convention open to the public like this one. It’s the only in Los Angeles and the largest in the nation. Don’t take it from me, but from the over 38,000 people who attended this past Saturday and Sunday. There are endless amounts to explore and discover revolving around travel and adventure, thus their name. Whether you’re a seasoned traveler or novice, this is your place. For starters there are almost 300 exhibitors from over 30 different countries, consisting of thousands of U.S. and worldwide destination experts. From foreign tourist bureaus, cruise lines, resorts, air & train transportation, private tours, guide books, clothing and more, you’re pretty well covered. Many of which have giveaways for trips, travel discounts and small gifts to hand out. It’s easy to see why it’s so busy.

There are multiple theaters where you can hear travel experts speak on the Travel Channel Stage, see cultural performances on the Global Beats Stage and even world culinary chefs demonstrate their country’s cooking on the Taste Of Travel Stage where you’re even able to sample the food. Speaking of travel experts, this year included some travel icons and heavyweights. Such as Samantha Brown – Travel Channel host of 15 years, Pauline Frommer – Editorial Director of the Frommer Guides and Publisher of Frommers.com, Rick Steves of Rick Steves’ Europe, Josh Gates – Host of Travel Channel’s Expedition Unknown, Phil Koeghan – Host/Co-Executive Producer of The Amazing Race & Author of No Opportunity Wasted, Joseph Rosendo – Host of PBS Series Joseph Rosendo’s Travelscope and Peter Greenberg – Emmy Award-winning investigative reporter, producer and CBS News Travel Editor. If it’s hands-on activities you’re looking then they have those too. They had diving lessons in a pool to get your feet wet, literally you could climb into the Bubble Roller Land Orbs for a tumble, ride on a SegWay or even climb a giant rock wall. 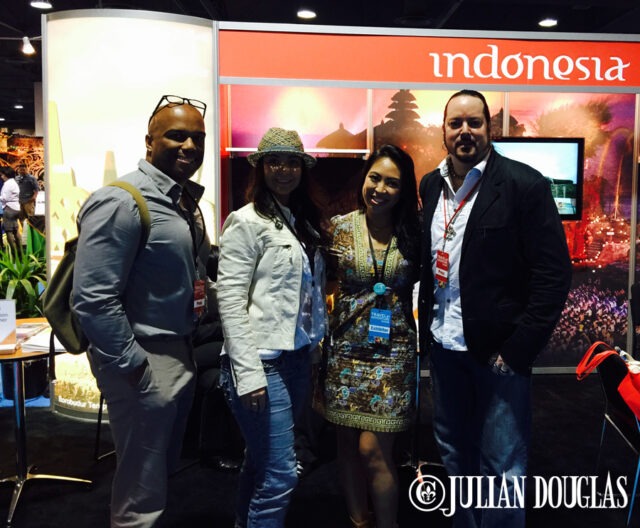 The best travel couple & even better friends, oh, and incredible staff of mine, Tracy & Jennifer, along with worldwide explorer Cindy, at the Indonesia booth.

My visit on Saturday was one filled with more than anyone could ask for, let alone have expected. The day started with checking in and getting my Press credentials. Although my wife couldn’t attend, I was lucky enough to be joined by our close friends and travel companions, Jennifer and Tracy. Who were able to resume their photographic and assisting duties as they’ve done before. Laminates in hand, we were escorted with other media people into the convention hall an hour before it was open to the public. There were several speakers welcoming everyone, including Pauline Frommer. She was one of three of the show’s travel speakers that I was hoping to meet. When she was finished I went up to Pauline to strike up a conversation, to which she couldn’t have been nicer. I told her about my blog and how I would love to ask her some questions for it. A perfect example of how genuinely nice she is she asked that since she is so old-school would I mind her calling me instead of e-mailing? Cool? No, too cool. So look forward to an upcoming Q&A with Pauline Frommer. 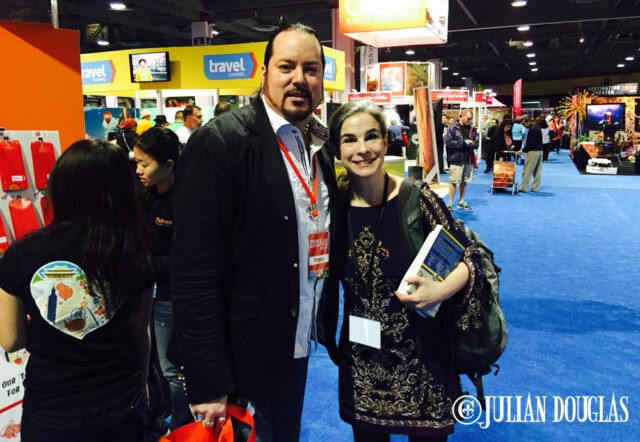 The Queen of Travel Guides… Pauline Frommer of www.Frommers.com.

We had some time before the doors opened to the convention so off to Rick Steves’ booth we went, the second of the three people I was hoping to talk to. Believe it or not, there he was, talking to his staff. So I approached him to grab a quick word. Unfortunately he said he had to get ready for his speaking engagement and off he went. I did after all want to meet him, guess that quick hello had to suffice, lol. Luckily I did have a few other goals in mind during the convention. Basically learning more about places my wife and I would like to travel to and especially those that readers are interested in seeing. With that in mind as the doors opened to the public and the masses entered, we headed up and down the aisles taking it all in.

Our next stop was the Travel Channel booth. With their fun staff of people working, we played some interactive games and watched people get their pictures taken with exotic destinations placed behind them.

Experience the world of travel with wonderful shows, including Samantha Brown’s at www.TravelChannel.com.

It was very interesting the differences in how exhibitors interacted with us. The Press laminates seemed to draw some to talk to us, where others didn’t seem to care. Personally I would think everyone working there would want to approach a media person to spread the word of what they do. Fortunately there were quite a few who couldn’t have been nicer and coincidentally they were also the ones that I had interest in talking to. Three of which were Dragonfly Tours of Italy, the Antigua & Barbuda Tourism Board and MSC Cruises.

Thanks to Roberto & Ivan of Dragonfly Tours. Find out more of their tours through out Italy at www.DragonflyTours.net.

Nicole and I along with Jen and Tracy had the trip of our lifetime in Italy, traveling to Rome, Siena, Florence and Venice. My recent blog on Eyes Of Rome has been my most read yet and gotten a lot of attention globally. It’s easy to see why we’ve been wanting to go back to experience more places in Italy, so I’m glad we ran into Roberto and Ivan from Dragonfly Tours. Within minutes of talking, their Italian personalities shined. They were so excited to hear what I was up to and saw how much I could do to bring attention to their company. After a great time talking, we left them excited to follow up after the weekend. 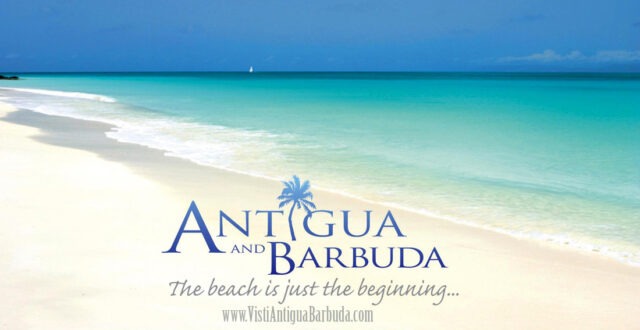 We soon hope to cover the islands of paradise, Antigua & Barbuda, thanks to Carolyn & Neil. See more of paradise at www.VisitAntiguaBarbuda.com.

Our excitement level only grew more as two warm and friendly representatives to Antigua struck up a conversation with us. Carolyn from the Antigua & Barbuda Department of Tourism and Neil of the Antigua Hotels & Tourist Association. Antigua had been one of the destinations my wife and I had thought of for our wedding anniversary, but just didn’t know enough about it at the time to go. After meeting Carolyn and Neil I’m convinced that Antigua is a prime location for us to travel to and can’t wait to visit. For the second time within an hour we were so happy to have a follow up conversation planned for after the weekend.

I can’t wait to set sail again with MSC Cruises & share it with all of you. Find out more of MSC at www.MSCCruisesUSA.com

Now if only to go 3 for 3, so to MSC we went. At MSC’s booth, we met a spirited rep from the cruise line, Herlan, who was there to keep this trend going. I had some stories of our past MSC travels and how we hoped that our next cruise with them would have better results. Especially since many people have their sights set on cruising. There are many people who haven’t cruised yet and also those who have but are not familiar with MSC. Again, such a great fit for us to choose MSC and expose them to a demographic they don’t have. It was so great meeting Herlan and I can’t wait to follow up. There it was, 3 for 3, awesome. 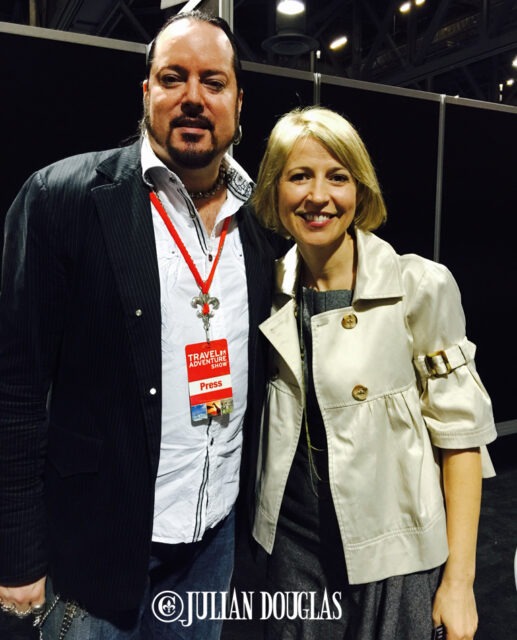 Hands down, the highlight of the whole Travel Show… getting to hang out with Samantha Brown.

We had accomplished so much since 9am, and with it around 12:30pm, it was time for something to eat. Grabbing some hot dogs and bottled water and desperately in need of a seat for a bit, we headed to the exhibitor/media lounge. Out of the corner of my eye I saw Samantha Brown, the Holy Grail of the trinity of travel icons I wanted to meet. I jest, but of all the celebs of the travel world there, I was hoping to talk to Samantha most of all. As a writer of travel, I can’t help but to love her perspective, let alone the way her personality really shines on her TV shows. I knew I had to say hello, but leave it to me, with all of the celebrities that I’m close with, to feel a bit nervous right then. Thanks to Jen, I got up the nerve and we both walked over. Let me tell you, Samantha is a doll in every sense. Within minutes we started chatting about what I do and what my plans are. She quipped out loud, how I would make for a great show. I joked to keep it down, lol. But inside I was feeling pretty ecstatic. She also was totally up for doing a little interview with me later, so we decided to exchange info and talk soon. Wow, could she have been any sweeter? When my recent show of mine with Lita Ford came up, Samantha started singing “Kiss Me Deadly.” Was this all happening!? I was waiting to wake from this dream at any moment, except it wasn’t one. 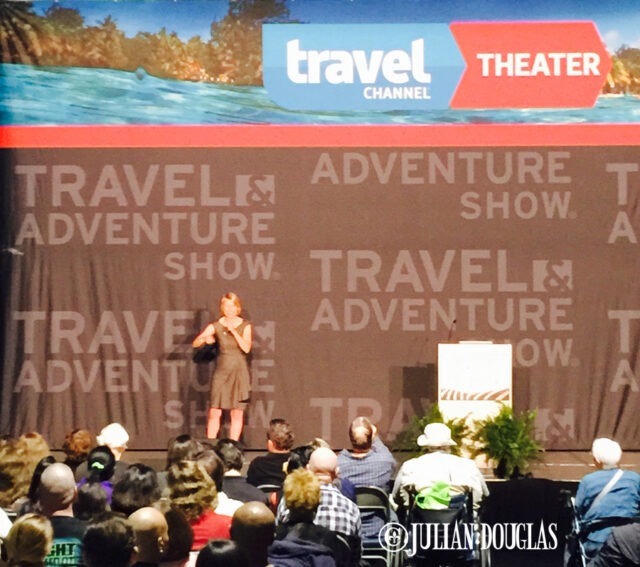 Samantha Brown speaking to around 1,500 people. Check out her site at www.Samantha-Brown.com

Well, Samantha had to get ready for her appearance and off to work she went as we headed back to our new friends at Dragonfly Tours, Antigua & Barbuda Tourism and MSC Cruises followed by networking and meeting more people from Louisiana and Key West to Prague and a couple of small cruise lines in Croatia, we were having some day. We even caught Samantha’s presentation and I couldn’t help but to feel special while passing her later in the middle of her Meet and Greet, only for her to pause and say a little hello. Such a sweetheart she is. 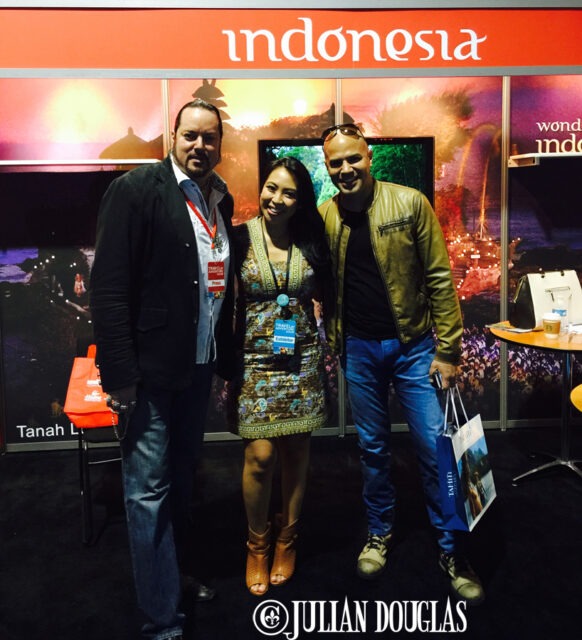 Nothing like heading out of the convention only to run into Philip with his awesome wife Cindy. I’m not sure if it’s their passion for travel or the 80’s I love more, lol.

Not too long after our friends Nathan and Nicole showed up, so we continued our journey through the vast convention floor where they ended up getting some great travel deals along way. We seem to run into more friends and basically just had a great day of it all. Before you knew it, we saw that the convention would be closing soon and it was time for us to finally call it a day. We headed back to the media check in, turned in our Press passes, said our thanks and bid adieux. Speaking of thankful, on top of all those that I mentioned, it’s important that I say thanks to Theresa and Ann at Ann Flowers Communications who made this all possible. 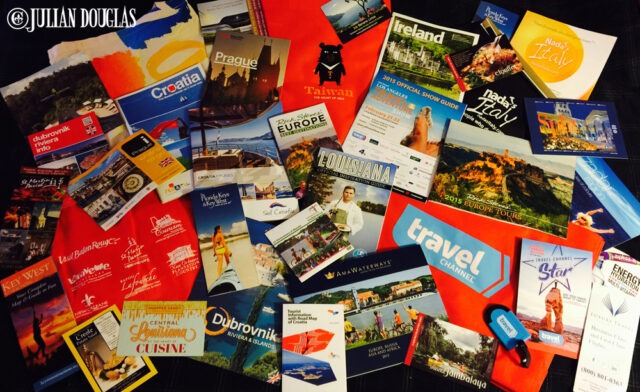 Just a sample of all the info and gifts I walked away with in one afternoon.

I can’t wait until next year and may even hit up another city’s hosting of it. In 2016 you’ll find the Travel & Adventure Show back here in Los Angeles at the Long Beach Convention Center on February 27th & 28th, 2016 along with stops in San Diego, Chicago, Dallas, San Francisco, Washington D.C. and Philadelphia. If you’re a fan of travel, as I said earlier, this is the place for you. So don’t miss it next year, I know we won’t. 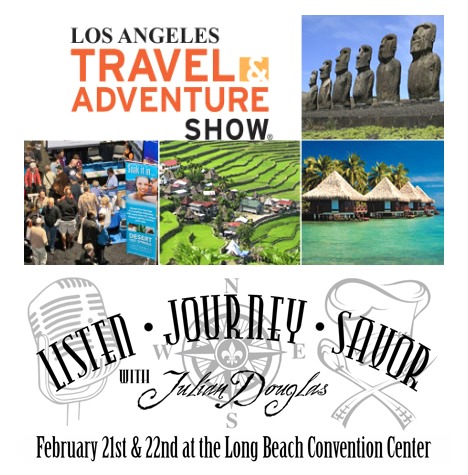