Over the past few years, the Los Angeles area has seen some of its greatest live music venues close down: The Universal Amphitheater, The Key Club, The Music Box, The Knitting Factory and BriXton-South Bay to name a few. Considering that Los Angeles is the entertainment capital of the world, it shows a need more than ever for high quality concert venues. 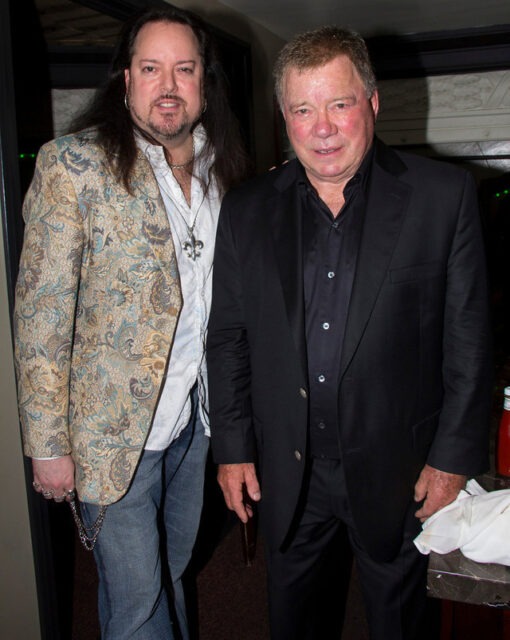 This is where an intimate venue in Hermosa Beach fits the bill; a real jewel just about a half hour drive from the Sunset Strip in the heart of Hollywood and walking distance to the Pacific Ocean. With a capacity of only 280 people, Saint Rocke provides the setting for a true fan experience. 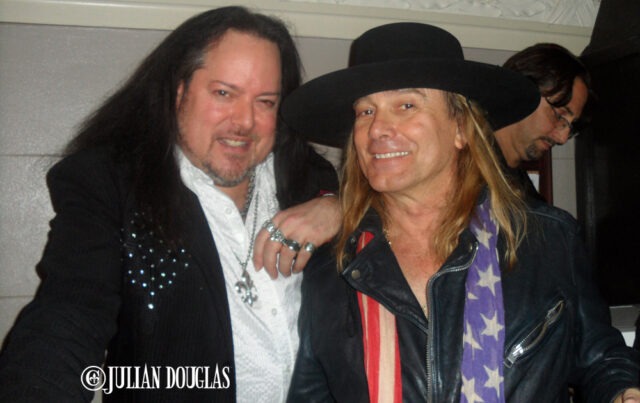 One of rock’s greats and darn good buddy too, Robin Zander of Cheap Trick, December 2013.

Whether a small acoustic set or a full out rock show, no matter where the patron is, they are close enough to the stage to interact with the artists. Depending on the band, there are plenty of comfortable VIP booths, tables set up on the large dance floor or standing room in front of the stage for those who like to be right in the middle of the action. 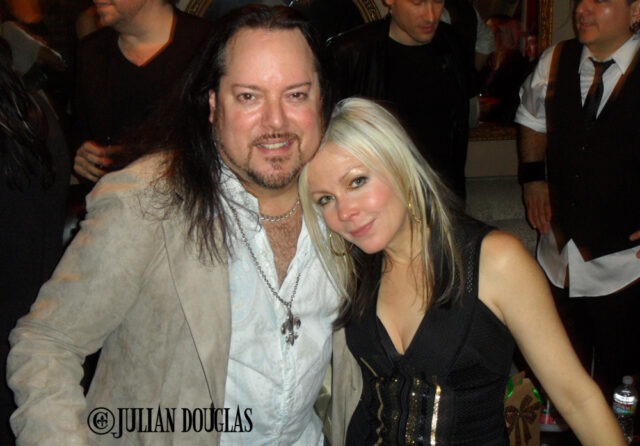 A true sweetheart in the world of music, Teri Nunn of Berlin, February 2013.

When it comes to the libations, they have it down. The huge main bar and smaller satellite bar are fully staffed with an attractive array of skilled professional bartenders and servers. They are knowledgeable, efficient and as friendly as can be. You’ll get the cocktail of your choice made right and may even find a new favorite. They prepare their own Bloody Mary mix, which is not that common these days. Myself, I really enjoy it’s bite, so it’s not unusual to see me with one in hand. 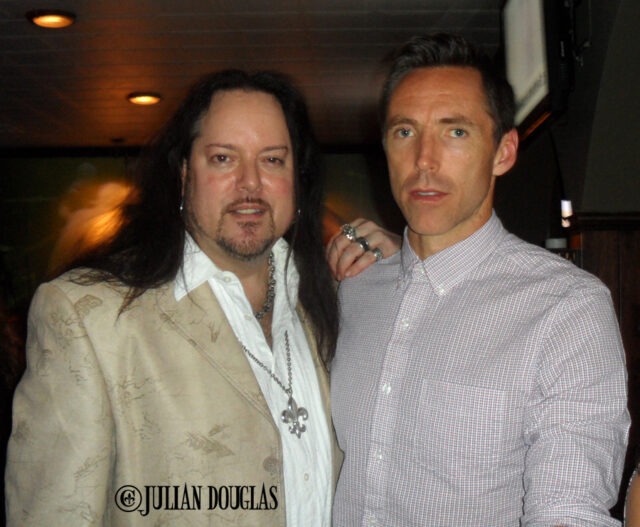 To go along with a nice cocktail and some great live music, a night out on the town isn’t complete without some tasty food and Saint Rocke is known for their kitchen. From their popular Happy Hour to concert dinner specials, there’s many choices; from casual bites like Roasted Brussels Sprouts, Crab Cakes or Grilled Romaine Salad to Tempura Tofu Tacos, Pan Seared Ahi Tuna or Braised Short Ribs. They have an ever changing menu with many more options and most nights they serve food until 10pm, even 11pm on special nights. It’s just another way Saint Rocke sets the tone for a wonderful night. 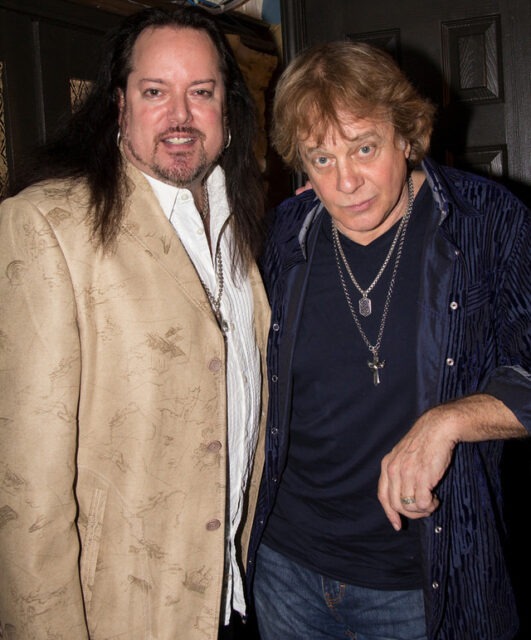 Another great night of many with Eddie Money, October 2013 (photo courtesy of Amanda Clarke Photography).

The location itself has quite the history. Originally it was a bank built back in the 1920’s, then decades later it became one of the South Bay’s favorite dive bars known as The Pitcher House. In March of 2008 it went through a massive remodel and Saint Rocke was born. Even though the club was updated, they wanted to preserve the history, so all the original architecture was kept. 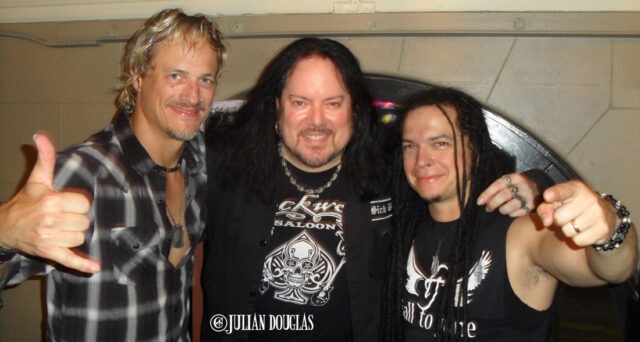 In no time it went from a beach hole-in-the-wall to one of L.A.’s most popular live music destinations. With upscale looks, incredible sound and lighting, HD TV’s throughout the club and even deluxe green rooms for the bands, there’s no doubt why Saint Rocke has thrived. 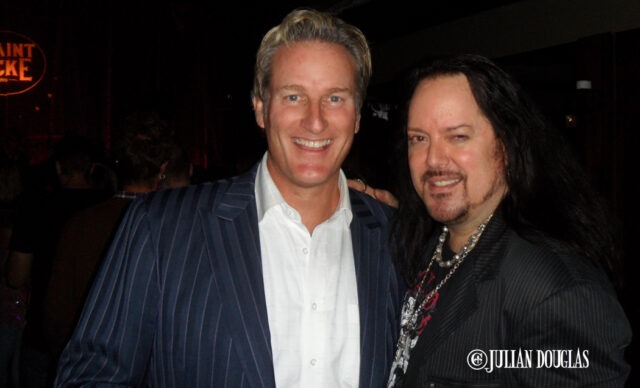 Awesome friend, baseball player & broadcaster, Steve Lyons, coming by as always for a drink with me… and some great music too, July 2014. 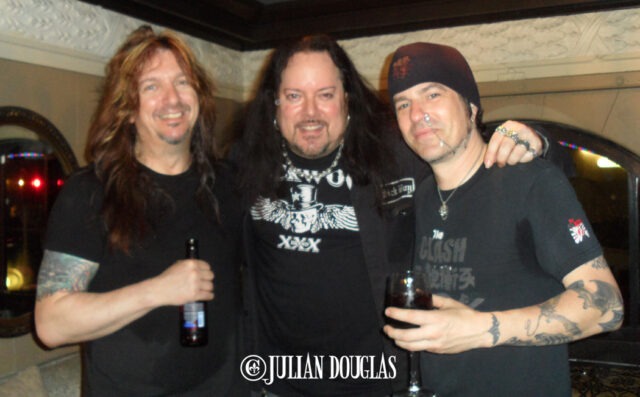 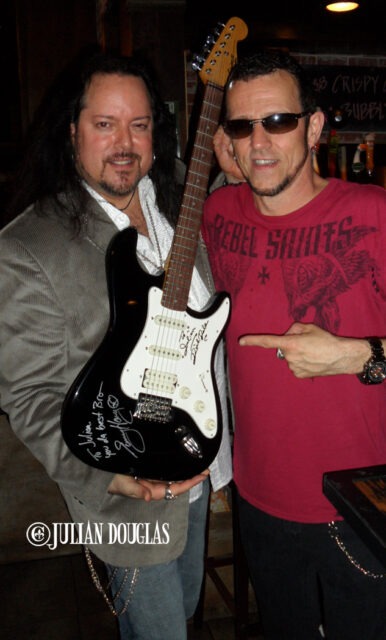 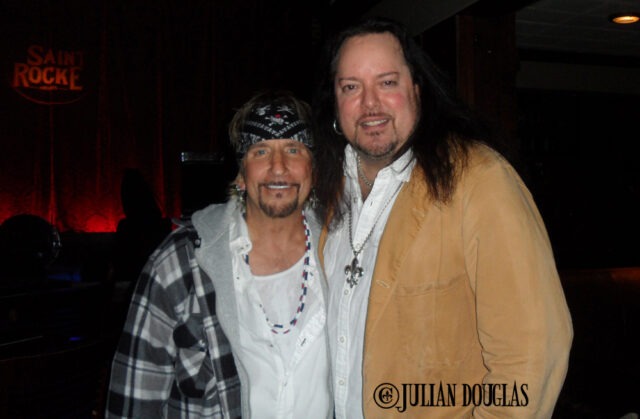 Getting ready to head over to his boat nearby, original lead singer of Great White and friend of 25 years, Jack Russell, February 2013. 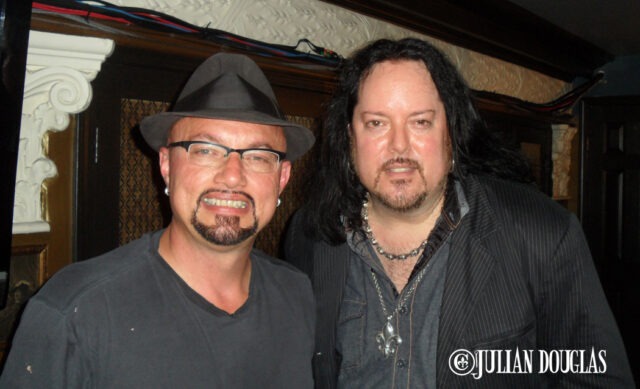 One of the all-time greatest voices of the 80’s, Geoff Tate of Queensryche. He’s a bit of a wine aficionado to boot, July 2014. 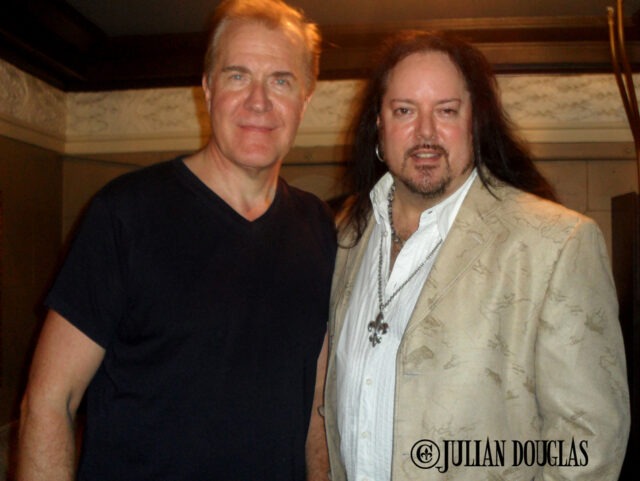 Too cool, more radical times with Fee Waybill of The Tubes, August 2014.

The Motels, Gene Loves Jezebel, The Untouchables, Clive Farrington from When In Rome, Boys Don’t Cry and even the world famous DJ. Richard Blade. In fact they even had William Shatner perform along with members of Yes. 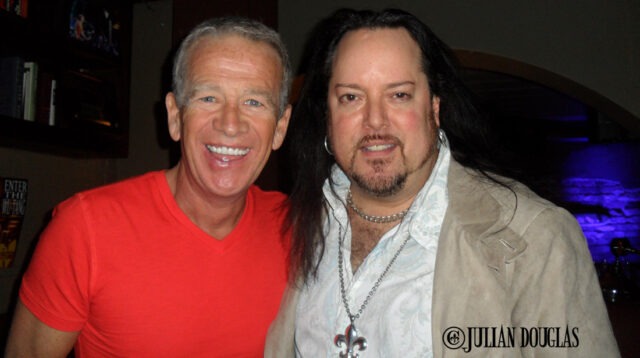 Fortunately it was this kind of talent that brought me to work with Saint Rocke. One of the perks of being a freelance concert promoter is I’m not tied down to one venue. During my years at The BriXton – South Bay right near by, both clubs had a bit of a rivalry, though there shouldn’t have been. BriXton had a capacity of around 500 and Saint Rocke about half that. What that means is the majority of shows feature non-competing acts due to their draw. However when BriXton was sold, it’s new owner, with no live music background started to pass on many great bands, thus giving Saint Rocke an even better foot hold on the South Bay. Even better, it opened the door for myself to start doing work with them. 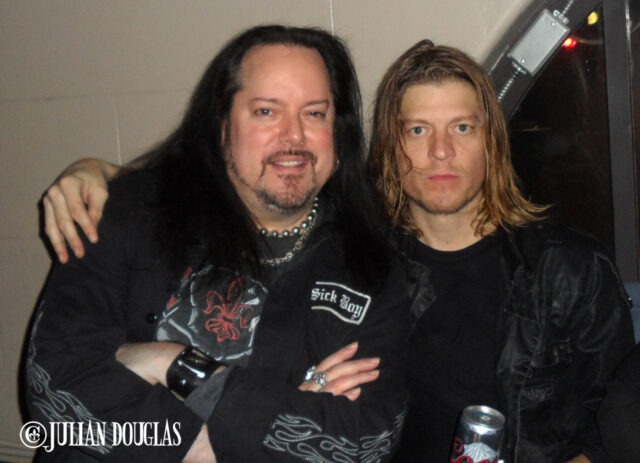 Having more fun with Puddle Of Mudd’s Wes Scantlin, January 2015.

Lucky for me their talent buyer Adam, had previously been handling the booking at BriXton since it opened, only to leave to Saint Rocke when the club was put up for sale. The minute he started there he was hoping I would follow, but the timing wasn’t right. I have a niche, though I’m known as “Mr. 80’s” and specialize with 80’s bands, I have major success with other genres too, so I wanted to make sure I was the proper fit. But as BriXton kept passing on great shows, I still have a job to do, so I continued to work with these artists, just up the street is all, and as the saying goes… the rest is history. 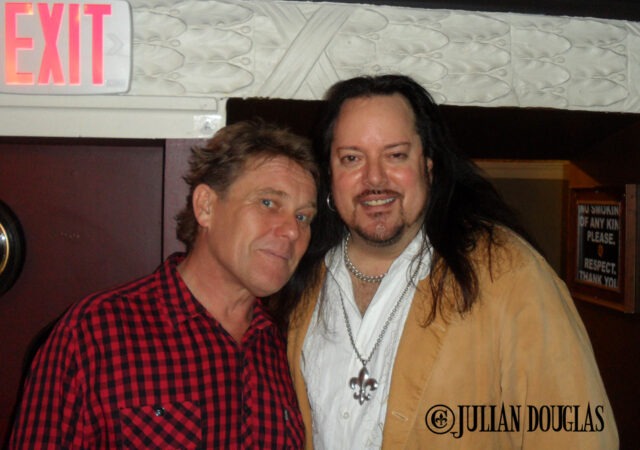 Dave Wakeling of The English Beat & General Public, who I’ve worked with on more shows in more venues than any other band in my 20 plus years in the music business, April 2013.

I’ve been working with Saint Rocke now for over two years, and I couldn’t be happier. Hands down, not only is it the premier live venue in the South Bay, I can honestly say, it is my favorite intimate venue of its size, anywhere in the Los Angeles basin. 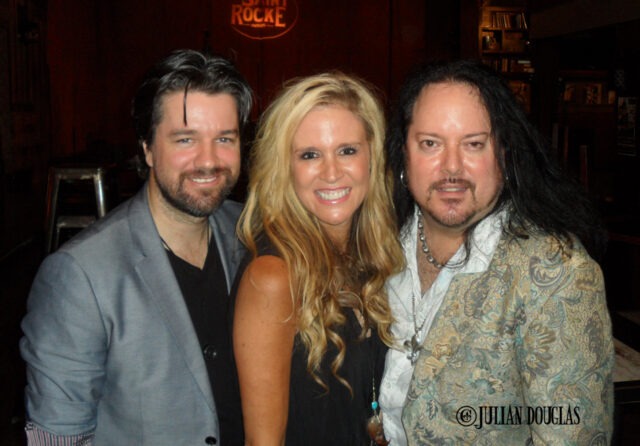 I will find myself there with friends seeing concerts that have nothing to do with my work, but because the right venue only makes live music that much better and Saint Rock is that venue. 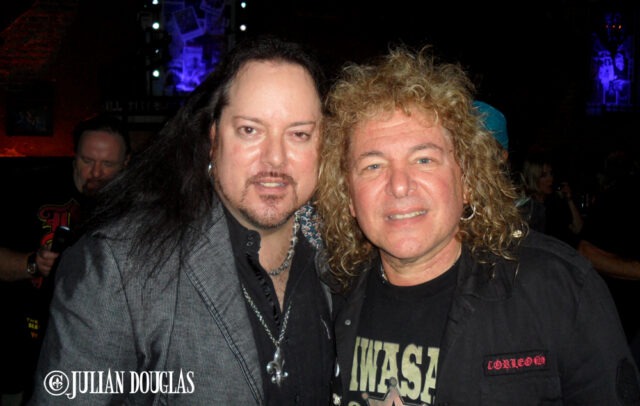 So many years, so many shows, I’m so lucky for my rock events with Dave Meniketti of Y&T, May 2014.

If you live in the Los Angeles area or are planning a visit, then you must check out their concert calendar and make your way down to the beach for one of their upcoming shows. You’ll be glad you did. 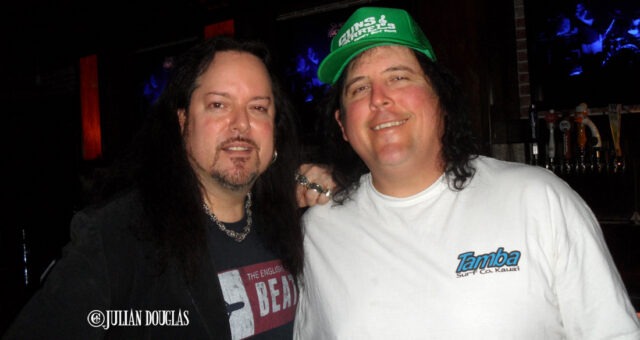